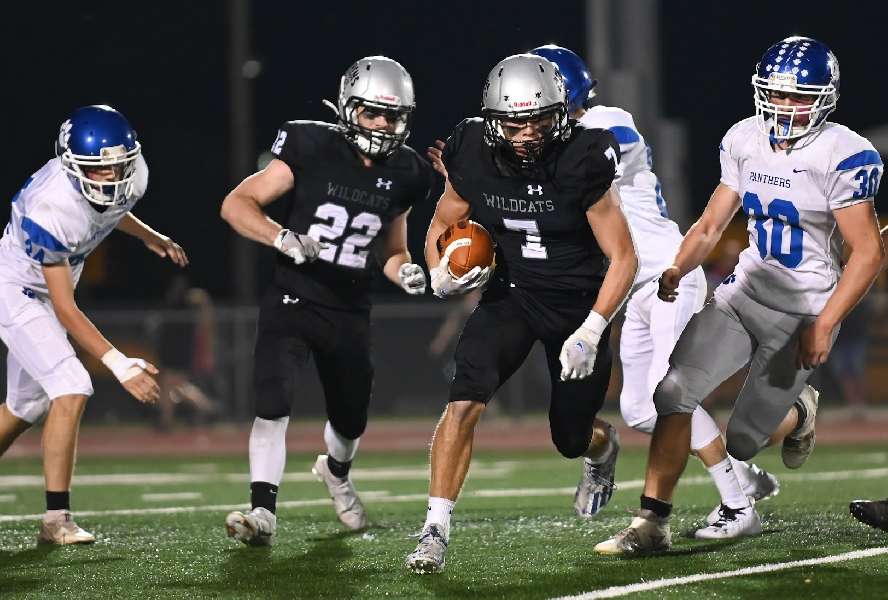 “It was a great team win,” said Athens coach Jack Young. “We had a really, really good week of practice, coming off a couple crazy weeks with a lot of distractions. I couldn’t help, but mention the whole team — the young guys on scout team did a great job — and we just got to keep building.”

Senior Shayne Reid rushed for 136 yards and three touchdowns on 16 carries to lead the Wildcats, who ran for 279 yards as a team. Caleb Nichols had 48 yards on the ground on six touches, while Jaden Wright (three carries, 71 yards) added a 67-yard touchdown run.

“At the tailback position we’re really four-deep,” Young remarked. “You saw what Jaden Wright did right here at the end of the game with a young offensive line and some of North Penn’s starting defense in there. We’re pretty deep there.”

Mason Lister continued to make some athletic plays, throwing the ball for 110 yards and a touchdown on 5-of-11 passing while also running in a score. JJ Babcock had two catches for 40 yards and a score to lead the receiving corps.

Defensively, the Wildcats held NP-Mansfield to just 24 yards rushing in the first half, and held them scoreless for three quarters, which included a goal-line stand that ended with a blocked field goal.

Cam Fabian was a bright spot for the Panthers, with 96 total yards of offense and two scores — one rushing, one receiving — while quarterback Karson Dominick was 11-for-17 for 83 yards and a touchdown.

Early on. it looked like North Penn-Mansfield was going to take the lead, as they took the opening kick-off down to the Athens 4-yard line.

A 13-yard pass play on third down, and a 9-yard run on fourth kept the drive alive, and a pass interference call gave them first-and-goal.

However, they only went backward after that, and the 16-play drive ended up with a field goal attempt from the 11-yard line that was blocked by the Athens defense.

Taking over at its own 27, Athens would need just nine plays to get into the end zone — eight of them rushes. Lister capped the drive with a 3-yard TD run. Reid, who ran for 42-yards on the drive, added the point-after to make it 7-0 with 32 seconds left in the opening quarter.

The Panthers turned it over on a fumble on the ensuing drive — linebacker Dylan Harford jumped on the loose ball for Athens. The Wildcats would take over at the NP-Mansfield 18-yard line.

It would take them five plays to get inside the NPM 5, but a sack on Lister pushed them back to the 17, where they ended up taking a Reid field goal. His kick was good from 33 yards, and Athens led 10-0 with 9:19 to play in the half.

NP-Mansfield went 3-and-out on its next two drives as its offense faltered.

On Athens’ next drive it needed just two plays to score, with Reid taking it up the gut 42 yards to pay dirt. A bad snap ruined his point-after attempt, but Athens led 16-0 with 7:11 left in the half.

On the Wildcats’ final drive of the half. they started on their own 27-yard line, and needed 11 plays to get into the end zone.

Two key pass plays on third-and-long kept the drive alive — a 25-yard catch-and-run by Nichols, and a Matt Machmer toe-line grab on the edge of the field for 28 yards — put Athens first-and-goal at the 10-yard line.

Penalties then reared their ugly head — two of them bringing back touchdowns — pushed Athens into a 4th-and-goal from its own 33-yard line.

Lister simply found the 6-foot, 7-inch Babcock in the end zone, threw it up to him, and watched him come down with it for the touchdown with 41 seconds left in the half. Reid added the point after to give Athens a 23-0 lead at the half.

The Wildcats then scored on their first two drives of the second half.

Starting at their own 36-yard line, they would use five plays to hit pay dirt, ending with a nifty 28-yard run by Reid. His kick was good, and Athens led 30-0 just over two minutes into the second half.

Even his coach was impressed with how Reid evaded several Panther would-be tacklers on the scamper.

“I couldn’t not say that I might have seen one of the greatest runs I’ve seen in a long, long time tonight,” Young said. “We execute up front, but then, my God, did he make a run.”

After a Panther punt, Athens started at the 50 and needed eight plays to get into the end zone. Reid got the 6-yard touchdown, but an 18-yard run on third-and-11 by Nichols kept the drive alive.

The NPM offense came online in the fourth quarter as Cam Fabian had a 3-yard touchdown run, followed by a 20-yard scoring catch from Dominick on the following drive to cut it to 37-14.

However, Athens had the final say, as, on the first play from scrimmage on the ensuing drive, Wright found some room running left and took it 67 yards down the sideline to pay dirt. Reid added the point after for the 44-14 final.

Athens will host undefeated Canton next week for a crucial NTL Division-I match-up for both teams. It’s part of the Wildcats’ tough stretch to end the season — Canton, Wellsboro, and Sayre — all playoff-caliber teams that will test the Wildcats.

But Young feels his team is ready.

They didn’t have school on Friday as part of a long weekend, but Young made sure they got up and were active all day to be ready for the Panthers.

“I just told them, Monday, they don’t have school, and they all looked at me like ‘yeah, yeah, yeah,” explained Young. “And I said, ‘sleep in, please, sleep in.’”