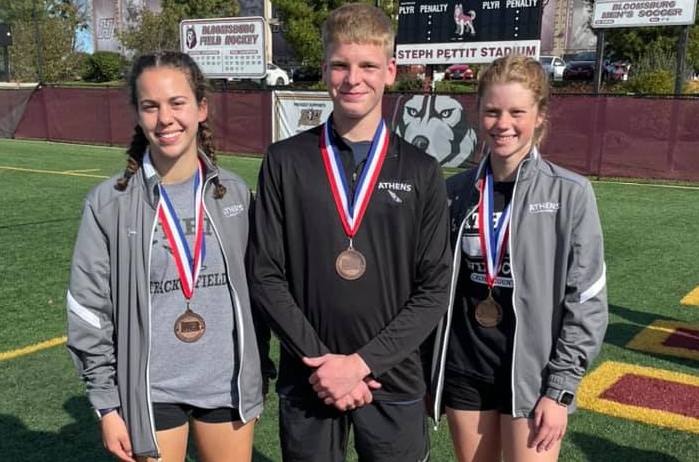 BLOOMSBURG — For Athens’ Emma Bronson, Thursday’s District IV, Class AA girls’ Cross Country Championship race was a long time coming. The junior had come up just short of qualifying for states last year, and wasn’t going to let it pass by again, as she, and her freshman sister Sara Bronson both qualified for States, along with Matt Gorsline in the boys’ Class AA race.

“Coming into this season, I knew I wanted to do it, and I did, so it’s really exciting,” said Emma.

Emma (20:51) was the final state qualifier, taking 14th overall, as she continues to work her way back from an injury. Sara (20:36) came in ninth and was the second highest freshman finisher in the field.

“This was my goal all season long, so it was really nice to have accomplished it,” she said.

Sara ran mostly by herself as she got caught in between packs for much of the race.

“I just didn’t want to get passed by anyone because I knew where I was,” she said. “I just wanted to keep running a good race, and try and catch the girl in front of me.”

Emma was racing throughout the course, and was out kicked at the end in a pack, but was still 29 seconds ahead of the next individual placer.

For the two of them, this is a dream come true they they’re going to experience states together.

“It’s super fun being able to run with her,” said Emma.

The Wildcats were eighth overall with 199 placement points.

On the boys’ side, Gorsline ran right on the bubble for most of the race, but used a furious finish to be the sixth individual to qualify, taking 12th overall in 17:27.

“The race went very well, just how I wanted it to,” he said. “I did know I was going to be toward the back a little bit. I knew I just had to sit there and kind of pass a lot of people at the end, that’s what I did.”

Gorsline out kicked five runners of a pack he was in during the final sprint.

“I knew I was right at ninth and 10th individual, so I locked my eyes on one guy three places ahead of me, and I caught him,” he explained. “Then I went for the next two, and I actually caught them, too.”

Last year, Gorsline, along with two other Athens runners, would have made states if it had been a normal year. That motivated Gorsline to make it happen this time around.

“It really put the pressure on for this year,” he said. “It really pushed me to strive to get there.”

The PIAA Cross Country Championships are Nov. 6 in Hershey.