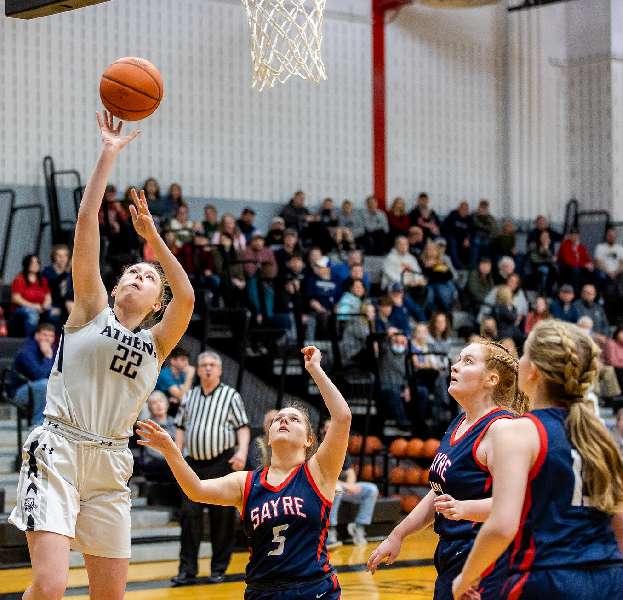 ATHENS - Athens raced out to a 39-4 halftime lead, and cruised to a 50-21 win over Sayre, which was playing its first varsity game in nearly two years, here Thursday night in NTL girls basketball action.

"We played well in the first half," said Athens coach Brian Miller. "We executed our offense, and we scored in transition; we like to score in transition, so it was nice to get that going."

Miller played his reserves for the entire second half.

"Sayre is down a little bit, and haven't played in a couple of years," he said. "It gave us the opportunity to give some girls major minutes at the varsity level, and to work on some things they need to get better at.

"It was nice to get everyone in the game - and to get all 11 girls major playing time," added Miller.

For Sayre coach Eileen Sparduti, it was her time on the sidelines for a varsity game (she coached the Sayre junior high team last year) since Feb. 10, 2020. For many of her girls, it was their first varsity game.

"Not only was there a skill and experience mismatch, but the environment - the crowded gym - played a part," she said.

"Young inexperienced teams need to learn to turn that noise off and focus inside the lines," noted Sparduti. "They let the moment own them early, but kept battling against Brian(Miller's) reserves with some confidence-building results.

"I appreciate the coaching courtesy Coach Miller extended to us," she added. "We were able to leave with some positives and that will  just make the league stronger down the road. We need to keep our programs viable."

Macik scored seven points points in the second quarter, including her 1,000th career point (see related story), in an 11-4 spurt as Athens stretched its lead to 39-4 at the intermission.

Jazz DeKay, who scored both of Sayre's buckets in the second quarter, added another bucket in the third quarter, while Liz Shaw, Kendra Merrill, and Gabby Shaw also scored two points apiece as the Redskins outscored Athens, 8-6.

Liz Shaw scored four points in the fourth quarter as Sayre closed the game with a 9-5 spurt.

Athens, now 3-1, returns to action Tuesday at Waverly in the opening round of the Valley Christmas Tournament, while Sayre (0-1) hosts Towanda in the other opening-round game.