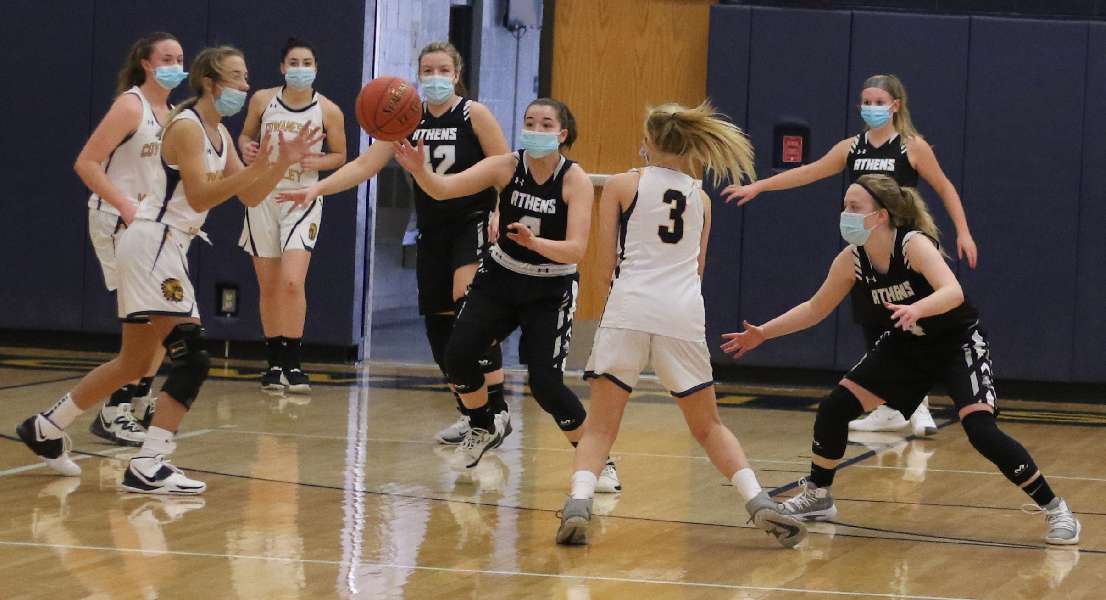 “It’s always good to get the first win under your belt,” said Athens coach Brian Miller. “We knew we were playing a young and inexperienced opponent. We just wanted to get sharp with the things we do because we’re playing a good Northeast (Bradford) team Monday night.

“It was good to get out there and play against someone else besides ourselves at practice.

“I thought we played an all-around good game,” added Miller. “We played good half-court defense, and we executed offensively against their man-to-man defense.”

The Lady Wildcats recorded 19 assists as a team and only 12 turnovers.

“We made the extra pass, and got some girls some easy baskets with that extra pass,” said Miller. “I thought we shared the ball very well.”

Seniors Megan Collins and Kayleigh Miller gave Athens an early 4-0 lead, then Paisley Nudd scored CV’s only bucket of the first half with 6:02 remaining in the first quarter to trim the deficit to 4-2.

Athens created several turnovers and easy buckets in transition, and pounded the offensive boards to scored the final 18 points of the opening stanza to take a 22-2 lead.

The onslaught continued in the second quarter as Macik scored six more points, Collins added four points, and Miller knocked down a 3-pointer in a 17-0 blitz that made it 39-2 at the half.

The Lady Wildcats scored the first nine points of the third quarter to extend the lead to 48-2 before Jana Quick ended the CV drought with a free throw with 4:24 remaining.

Miller drained a pair of 3-pointers in the third quarter to finish with three in the game, giving her 173 for her career, which puts her tied for second on the program’s all-time list with MaryEllen Onofre, who is her father’s cousin. Mallory Hafer is the school’s all-time leader with 203.

Athens returns to action Monday evening when it hosts NEB. The varsity games tips off at 6 p.m., with the junior varsity game to follow.