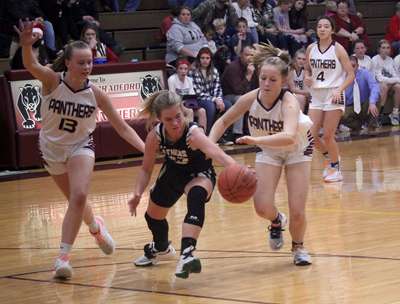 ROME — For a little bit in the fourth quarter, it was looking like shades of NEB's recent loss to Towanda on Friday. The Panthers had seen a big lead dwindle down to a 1-point deficit, but this time they performed in the clutch, scoring seven straight points to pull out the 52-46 win in NTL girls' basketball action Monday."

"There was more than a little shades," said NEB coach Ben Beebe. "There was way too many coincidence there that we didn't like, but the girls held on, and came through, and still continued to play hard. We've been trying to work on that constantly. That's a huge deal for us, trying to close out games, and we're starting, so, hopefully, the next couple of games, we'll have that mastered."

Maisie Neuber finished with 25 points, six boards, and four steals for NEB, while Alena Beebe had a strong game, scoring 17 points on 5-for-12 from 3-point range.

"She shot really well today, which really helps," Beebe said about Alena's performance. "She's a really good shooter, And, you can have her and Maisie at the same time on fire, it's hard for an opponent.""¨
Kayleigh Thoman returned from injury to chip in with six points, while Julia Brown added three points, and 10 boards. Kate O'Connor had one point with a team-high 11 boards.

It was another slow start for Athens, but coach Brian Miller liked the fight he saw in his team."¨
"˜It's tough to come back, but I give the girls credit, they fought," he said. "They played good enough defense to keep it close, we actually took a lead at 46-45, I believe. And then (Julia Brown), she made a nice three-pointer in the corner. And then we just didn't execute on the offensive end down the stretch, but kudos to them.

"They're good, they're one of the area's best teams, and so I'm disappointed we lost, but I'm also happy that we only, you know, by six points, and it was closer than that without the fouls down the stretch," added Miller."¨
This gives him a good idea of how they would perform against Towanda next month when they start divisional play, as the Panthers had just come off a close loss to the Knights.

"That gives us some confidence going to play Towanda," Miller said. "But, again, we've got to play 32 minutes, we can't play 26 or 25, and have a lot of turnovers. We just have to play better, more consistently."

Karlee Bartlow had a team-high 16 points to lead the Wildcats, including three 3-pointers, while Addy Wheeler netted 12 on four 3-pointers, and Caydence Macik notched 10. Mya Thompson chipped in with eight points.

NEB jumped out to an 18-13 first quarter lead behind nine points from Beebe, all on 3-pointers, and seven from Neuber. The Panthers tacked on 15 more points in the second quarter, thanks to three 3-pointers, two of them from Beebe, to take a 33-23 lead.

Bartlow had eight first half points to lead the Wildcats.

In the third quarter, NEB's offense cooled, allowing Athens to chip away, and even tie the game up at 35-all at one point. The Panthers scored the final six points of the quarter to take a 41-35 lead into the fourth.

Barlow and Thompson combined for nine points to lead the Wildcats, while Neuber carried NEB, scoring six of her team's eight points in the frame.

In the fourth, Athens closed again, this time taking a 46-45 lead off a Wheeler 3-ball with 4:45 left in the game. "¨
Then, on NEB's next possession, Brown answered with a 3-ball of her own, giving them a 48-46 lead with just over four minutes to play."¨
The Wildcats would get a chance to tie with two free throws at the 2:45, but they were both missed. NEB then ran clock, getting it to under a minute when the Wildcats had a chance to tie with 32 seconds to play, but the shot was off."¨
Then, with 27.3 seconds to play NEB turned it over, but as the Wildcats tried to get the ball into Macik, Neuber knocked it away, with Thoman picking it up and getting fouled with nine seconds to play.

She hit both, effectively ending the game.

Athens, now 2-1, returns to action at Waverly Dec. 28 in the opening round of the Valley Christmas Tournament.