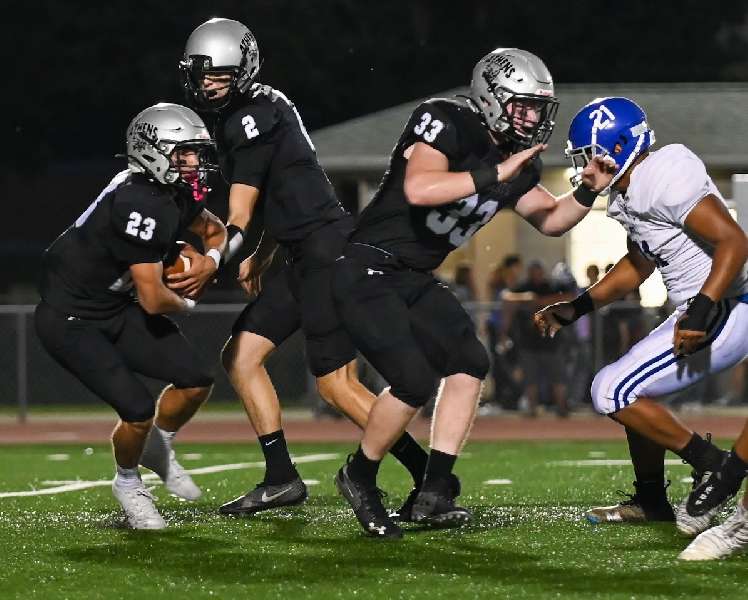 ATHENS — South Williamsport dominated the game statistically, but needed a fourth-quarter TD to pull out a 7-0 win over Athens here Friday night in NTL football action at Alumni Stadium.

The Mounties played keep away in the first half, running 36 plays for 210 yards, while the Wildcats ran just six plays for 1 yard, but the game was scoreless.

“Our kids scrapped it out,” said Athens coach Jack Young. “How many times did we stop them in the red zone?

“We hung in there and the defense just kept making plays,” added Young.

South Williamsport coach Chris Eiswerth said the first half was the continuation of a disturbing trend for his squad.

“In the first half, we couldn’t finish,” he said. “Early in the year, we haven’t been able to finish.”

Junior QB Mason Lister ripped off an 18-yard run on Athens’ first possession of the second half for the team’s initial first down of the game, but a pair of costly penalties and a South Williamsport sack forced the Wildcats to punt.

The Athens punt pinned South Williamsport at its 13, but with 18 consecutive run plays, the Mounties covered the 87 yards. Lane Lusk capped the drive, which chewed up more than 10 minutes off the game clock, with a 2-yard TD run. Kayvan Shams split the up rights with the PAT to make it 7-0.

On the first play following the ensuing kickoff, senior tailback Shayne Reid ripped off a 23-yard run on a reverse, but four plays later, the Mounties defense snuffed out the drive with a fourth-down stop.

The Mounties, on the back of Lusk’s bruising runs, picked up a pair of first downs before turning the ball back over on downs.

The Wildcats’ night on offense would come to an end moments later when Lister’s fourth-down pass was picked off near midfield.

The Mounties ran the final 2 1/2 minutes off the clock to preserve the win.

Lusk led South Williamsport with 181 yards and one TD on 32 carries, while Clayton Swarthout added 70 yards on 17 carries, and QB Landon Lorson added 52 yards on 13 carries.

The Wildcats were held to 53 yards in total offense on just 17 plays.

Lister completed 3 of 6 passes for 20 yards.