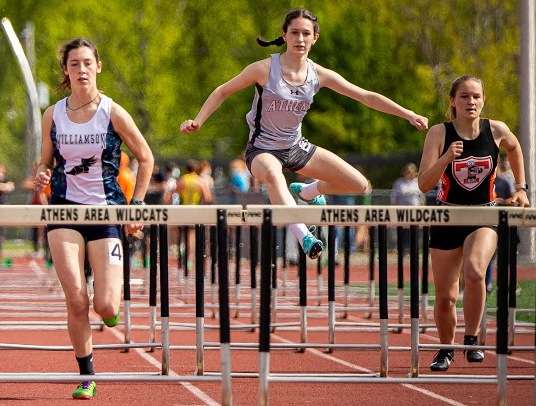 ATHENS — Athens sophomore Emma Bronson has been stellar all season  for the Lady Wildcats, and on Friday, at the NTL Coaches’ Invitational, she was dominant, sweeping the distance events.

“It was hard, but it felt good to win all three,” said Bronson.

“I kind of stayed with the same strategy going in,” she said. “I knew there were a lot of good runners in each race, so I just wanted to stick with my game plan.”

Her three wins were part of seven for the Athens’ girls team on the day.

Pernaselli (86-feet, 1-inch) was sixth in the javelin.

Both teams will be competing at the District IV Championships Thursday and Saturday at Williamsport High School.

Bronson may triple down at districts, but hasn’t made any decisions. She knows one thing, it will be a change competing in Class AAA.

“It will definitely be different between NTL, and districts,” she said. “But it will be fun.”