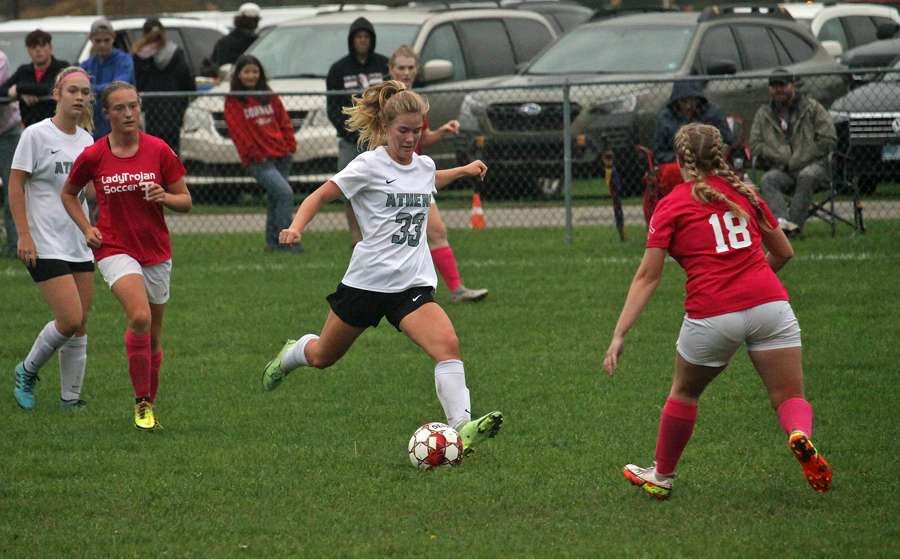 Troy, which has not won an outright NTL title since 2010, improves to 7-1 in the league standings, while Athens falls to 6-2. The win also avenges a 3-2 early-season loss at Athens.

Parker put the Lady Trojans on the board in the 5th minutes, then took a through-ball from Camille McRoberts in the 12th minutes and knocked it past Athens keeper junior Karlee Bartlow to make it 2-0.

Less than a minute later, junior Alli Thoman set up Walker  for her first goal to trim the deficit to 2-1.

Four minutes later, freshman Addison Wheeler found Walker outside the box, and she drove a shot from 30 yards out over the keeper’s head to tie the game at 2-2.

Shortly after the tying goal, the Lady Wildcats had a chance to take the lead on a direct kick, but it sailed wide.

Troy controlled the action for the majority of the next 40 minutes.

With 9:59 remaining in the first half, Parker slid a pass through the defense to Makena Matthews, who punched a shot into the net to give the Lady Trojans a 3-2 lead.

With just 1:11 left before the intermission, Parker, off a feed from Anneleise Getola, gave troy a 4-2, which it would carried into the half.

After the intermission, Troy kept the ball in the Athens defensive end for the first 15 minutes, but Barlow and company kept the Lady Trojans off the board.

After an Athens counter came up empty, Parker and McRoberts each got off shots that were on target, but Barlow made nice saves on both to keep the score 4-2.

After a leaping save by Barlow, Walker worked her way down the field and punched a shot past Troy keeper Madelyn Seeley to pull Athens within a goal, at 4-3, with 16:37 remaining in the contest.

But 5 1/2 minutes later, the Athens defense was able to clear a ball out of the box after a Troy direct kick, and Parker knocked a shot into the back of the net to make it 5-3.

Barlow had seven saves for Athens, while Seeley had four for Troy.

Athens, now 8-6 overall, returns to action next Saturday when it hosts Bloomsburg.