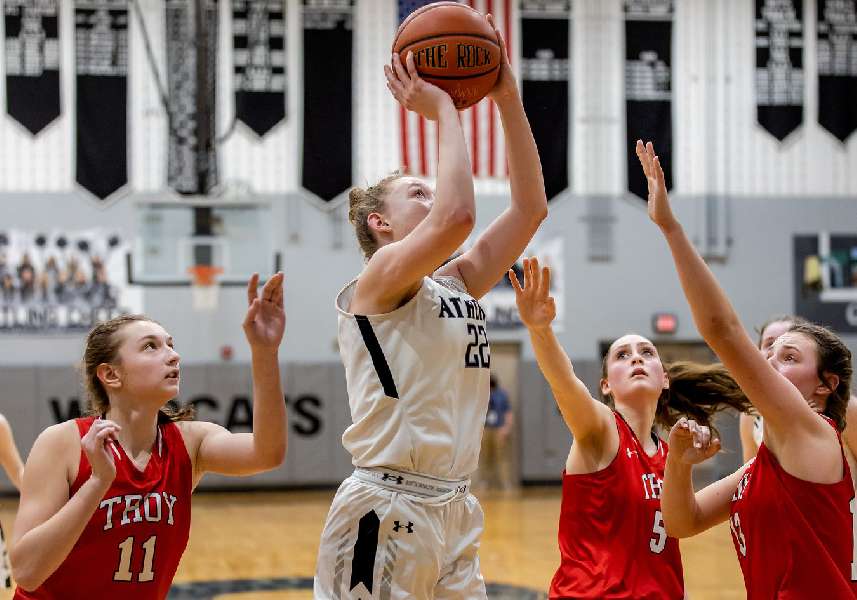 ATHENS — Athens dished out a large dose of senior Caydence Macik, and an even bigger dose of defense in a 45-26 win over Troy here Thursday night in NTL Large School girls basketball action.

“I really love to coach defense, and we have a philosophy,” said Athens coach Brian Miller. “We all believe in it, and the girls really played to that philosophy tonight.

“We wanted to limit them driving the ball to the basket, because they are more of a driving, slashing team,” noted Miller. “We made sure we were outside on their shooters, and we did a nice job fronting the post because they love to enter the ball into the post.

“That might have been our best defensive performance of the year as a team,” added Miller. “To hold that team to 25 points … even the shots they made were highly-contested.”

The win also avenges a 35-28 loss at Troy earlier this season. In that loss, the Lady Wildcats played without junior Karlee Bartlow.

“Having Karlee (Bartlow) was the huge difference,” said Miller. “She’s one of our better guards and scorers and has experience; that was a huge difference.

Macik scored 15 points in the first quarter to help Athens to a 17-9 lead after the first eight minutes.

“We got the ball Caydence a lot, especially early on, and she finished,” said Miller. “She had a really good offensive night.”

Athens stretched its lead to nine points, at 22-13, on a 3-pointer by Addy Wheeler with 2:10 remaining in the first half.

Karlee Bartlow scored on a driving lay-up early in the opening minute of the second half, and Macik scored off a steal under the bucket to give the Lady Wildcats a 27-15 lead with 6:18 remaining in the third quarter.

A jumper by Troy’s Katie Lackey with 3:10 remaining in the third quarter trimmed the deficit to 30-21, but Athens closed the quarter with a 6-2 spurt — on a jumper by Macik, and back-to-back driving lay-ups by Karlee Bartlow — to take a 36-23 lead into the final eight minutes.

Sophomore Mya Thompson scored four points, and Macik converted an old-fashioned three-point play as the Wildcats used a 9-2 spurt to take its biggest lead of the game, at 45-25, in the final minute of the game.

Athens, now 15-5, moves into a tie with Troy for second place in the Large School Division, but currently holds the third tie-breaker, which is power points.

Athens closes out the regular season Monday when it hosts North Penn-Mansfield, while Troy plays at division champion Towanda.