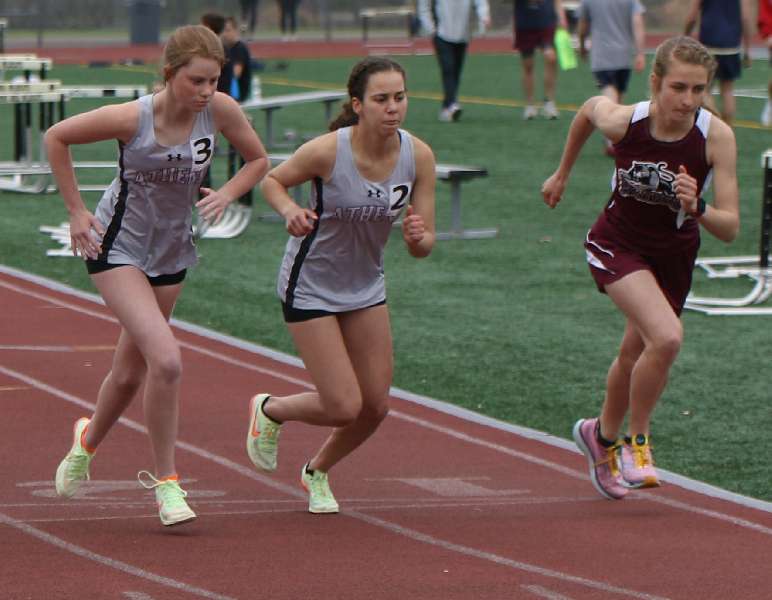 “The 1600 was a tremendous race tonight,” said Athens coach Mike Bronson. “(NEB’s) Gracelynn Laudermilch, Emma, and Sara all ran really well, working together to all set PRs and a school record for Emma.”

Overall, Bronson was pleased with his team’s performance.

"The girls had a very solid meet tonight,” said Athens coach Mike Bronson. “We had a lot of girls set PRs, so we are definitely headed in the right direction leading up to NTLs and Districts.

“Cassy Friend had a great meet,” he noted. “The throwers came through once again — Olivia Bartlow had a nice PR in the shot … and Hannah Walker had a great day.

“Now, we have 10 days until the NTL meet,” he added. “We will get back to work to sharpen up for the league meet and then districts.”

Bartlow won the shot put with a heave of 31-feet, 6-inches, while sophomore Emma Pernaselli was second at 30-feet, 4 1/2-inches.

Bartlow also won the discus with a toss of 94-feet, 9-inches, and Pernaselli was third at 78-feet, 7-inches.

Thompson won the triple jump with a mark of 31-feet, 4-inches, and Taylor Walker was third at 28-feet, 11-inches.

Bentley, sophomore Abby Prickitt, Thompson, and junior Audrey Clare teamed to win the 3,200-meter relay in a time of 12:43.23.

Hannah Earls was second in the high jump at 4-feet, 2-inches, and Taylor Walker was third at 3-feet, 10-inches.