ARCHBISHOP CARROLL ENDS ATHENS' RUN IN 'SWEET 16' OF 4A PLAYOFFS 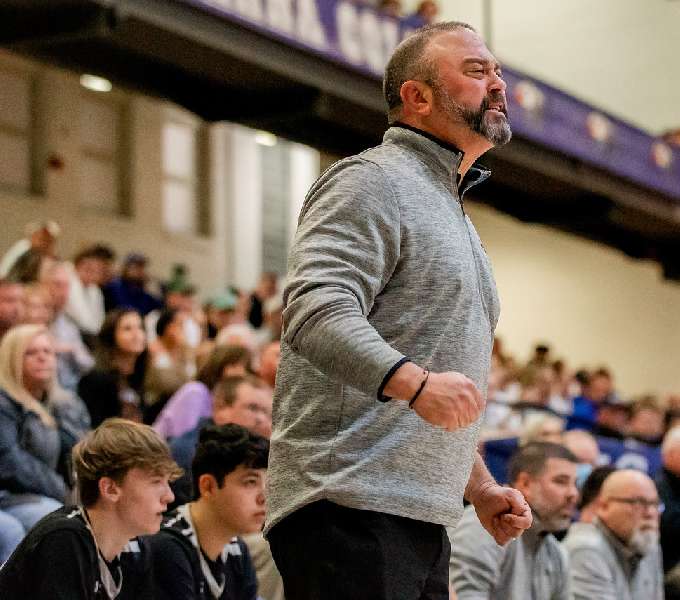 SHAMOKIN — Archbishop Carroll used an early 19-2 run to take control, and end Athens’ season with an 83-38 win in the “Sweet 16” of the PIAA, Class 4A boys basketball playoffs here Friday night.

“I’m so proud of this team,” said Athens coach Jim Lister.  “There is nothing for them to hang their heads about.”

Senior Troy Pritchard scored off a feed from junior Mason Lister to tie the game at 3-3  less than a minute into the game, but Archbishop Carroll scored the next 12 points in a 16-2 run to close the opening stanza with a 19-5 lead.

Moses Hipps knocked down a 3-pointer in the opening moments of the second quarter to extend the Patriots’ lead to 22-5.

“We came out and had some good looks, we just didn’t make the shots,” said Lister. “Archbishop Carroll is an excellent basketball team. Take nothing away from them, they made the shots.

“And Moses (Hipps) was excellent,” added Lister. “Even with two guys in his face, he was draining 3s from everywhere.”

Hipps, who finished the game with 31 points and six 3-pointers, knocked down a trio of 3-pointers and scored 12 points in the second quarter to fuel a 25-16 run that gave Archbishop Carrol a 44-21 led at the half.

The Patriots continued the onslaught in the second half, outscoring Athens 2011 in the third quarter, and 13-6 in the final eight minutes.

“I’m not taking anything away from (Archbishop Carroll) at all, but the private Catholic schools and the charter schools in Pennsylvania are just at a different level,” said Lister.

“I think we got to see that tonight,” he added.

“I’ve been with these kids for 10 years,” said Lister. “They’ve shown the way on what you need to do to be successful in the game of basketball.

“I’m so proud of them, and so happy for them. They are a great bunch of kids, and I have no doubt they will be extremely successful in life,” he added. “I could not be happier about how their final season went.”

Lister knows his seniors will be tough to replace, but he believes he has plenty of talent returning.

“I told the underclassmen after the game … I hope they learned from our seniors, and what it takes to be successful because they have some pretty big shoes to fill.

“Mason (Lister) is our only starter returning, but Chris Mitchell improved tremendously,” said Lister. “I think he’ll be pretty dominant underneath for us next year.

“Lucas Kraft got some experience and will be a senior next year, and we have some really good under classmen,” noted Lister. “Korey Miller will be able to handle the ball, and Xavier Watson and Kolsen Keathley will play huge parts in our program starting next year.

“There’s no reason we can’t make a pretty good run next year. I think we’ll have all the tools — we’ll have kids who can score, we’ll have size, and we’ll have guards.

“We’ll put the time and work in to see that they’re ready come November,” he added.