ATHENS BOUNCES BACK TO BLANK NP-MANSFIELD, 4-0 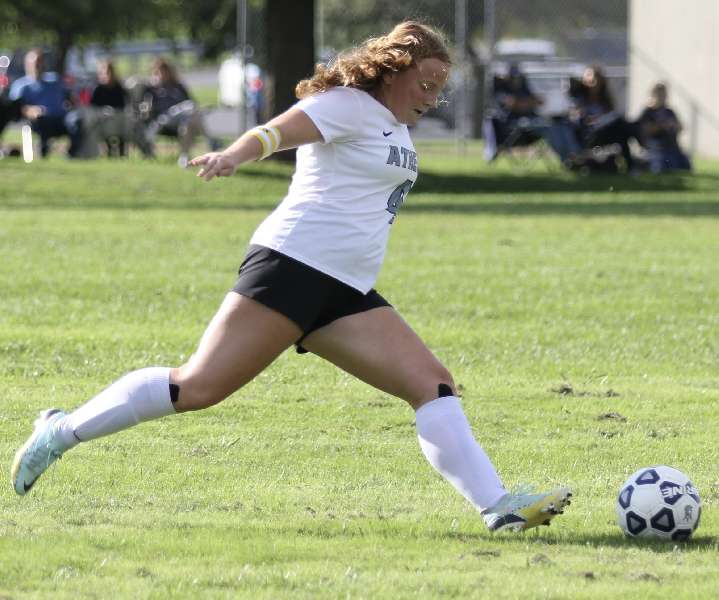 MANSFIELD —  Freshman Kaitlyn Sutton netted her second hat trick of the young season as Athens bounced back from a loss to Waverly Monday night with a 4-0 win over North Penn-Mansfield here Tuesday afternoon in NTL girls soccer action.

“It’s a nice bounce-back from (Monday) night,” said Athens coach Rich Pitts. “We scored two early in each half, which allowed me to use the full bench and tinker with the lineup and formation.

“Now, we focus on the defending champs on Thursday,” added Pitts in reference to the Lady Wildcats’  home game against Troy Thursday.

Sutton put Athens on the board 3 1/2 minutes into the game when she collected a rebound off the keeper’s hands and knocked it into the net.

In the 16th minute, Sutton took a through-ball from junior Mya Thompson, and beat the keeper in a 1-v-1 to make it 2-0.

Senior Ally Thoman fielded a pass over the back line from sophomore Emma Yohe, and beat the keeper 1-v-1 to make it 3-0 just 61 seconds into the second half.

Sutton finished off her hat trick 3 1/2 minutes later when she punched a rebound off the keeper into the net to make it 4-0.

Athens improves to 2-2 on the season.