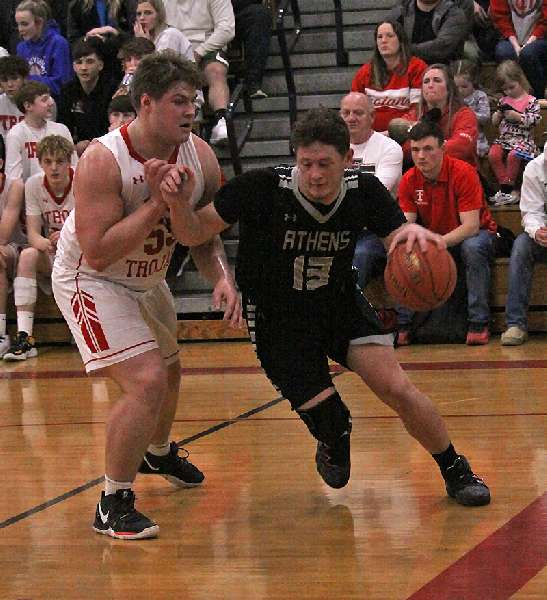 TROY — Athens came within a rimmed out lay-up of possibly taking hold of the NTL Large School title chase, but ultimately ran out of gas as it fell to Troy, 70-64, in boys basketball action here Saturday at the Commons Building.

The Wildcats, who trailed for most of the game, rallied from 14 down in the third, to a 2-point deficit with a little more than a minute to go when that shot rolled out. In the final 67 seconds, the Trojans used the free throw line to out score Athens, 6-1, to preserve the win, and clinch their second straight division championship.

“First, I want to say I’m going to give Coach Renzi and Troy all the credit in the world,” said Athens coach Jim Lister. “They really played hard tonight, they won the game.

“I’m very proud of my kids. This was a hell of a gauntlet we had to go through here, (NP-Mansfield) Wednesday night, Wellsboro last night) and to come here and play Troy tonight, we were asking a lot of our kids, and they never quit,” noted Lister. “They came back, and they showed me a lot of heart tonight, and I’m extremely proud of them.”

The Wildcats rolled past NP-Mansfield mid-week, but had to hold off Wellsboro on Friday before facing the league leading Trojans.

“I thought our legs were a little tired in the first half,” said Lister. “I think that’s why they got a good lead on us. But, just my kids, man, they got a ton of heart, they fought back.”

Babcock certainly put it all out on the court as he had one of the best games of his career with 30 points, eight boards, four assists, four steals, and three blocked shots. In the first half, he helped carry the load with nine points in the opening quarter to keep Troy from getting too far out in front, then scored 13 in the final frame during Athens’ rally.

“I’m thrilled with JJ, and his effort tonight,” Lister remarked. “I mean, he just wanted to take over the game, he wanted to win.”

Mason Lister added 15 points, and five boards, as he was money with his mix of baseline jumpers and runners.

“I’m going to give a big shout out to my freshman Kolsen Keathley,” said Lister. “He came in in that quarter and he busted his tail, and he worked hard, and he got us back in that game.”

Barrett came out of the gates on fire, hitting back-to-back 3-balls in Troy’s first two possessions to put the Trojans up 6-0. Their lead would get to 8-0 on an Imbt lay-up from a VanNoy pass, but a Lister jumper stopped that run.

Imbt would make it 10-2 with another lay-up at the 4:17 mark of the first quarter, but the Wildcats came back with jumpers from Babcock and Lister.

Imbt’s third bucket of the game made it 12-6, but after that the Wildcats went on a 9-2 run to take a 15-14 lead. Babcock scored seven of the night points, while Lister had a lay-up.

However, Barrett’s third 3-pointer of the quarter with 16 seconds on the clock would put the Trojans back up 17-15.

Troy came out strong in the second, with getting back to back lay-ups from Barrett and Imbt to take a 21-15 lead in the first minute.

The back-and-forth continued for the next three minutes, as both teams had five points apiece, until Lister hit a baseline jumper at the minute mark to cut it to 28-27.

Oldroyd would answer with a 3-ball, followed by a Barrett dump off to Imbt down low that put the Trojans back up 33-27 with 21 seconds left to play.

Troy came out of the half like a shot, beginning with buckets from Imbt and Barrett to take a 37-29 lead.

Babcock would get another old fashioned 3-point play, but the Trojans followed with a 6-0 run — Barrett had a lay-up, Oldroyd finished a put back, and Chimics scored on a transition lay-up – to build their biggest lead yet, 46-34.

A Babcock steal and lay-up at the 2:52 mark made it a 10-point game, but two more Trojans baskets — one from Chimics, the other from Imbt, and both off Barrett assists — gave the Trojans a 50-36 advantage with 2:00 left in the third.

Athens answered with a 4-0 spurt as Babcock found Lister for a lay-up, and Brown had a steal and bucket.

Babcock would continue to make plays for his team, though, as he found Brown for a bucket, then had another steal and lay-up, to cut it to 53-44.

The final basket of the quarter belonged to Barrett, though, as he hit a runner to make it a 55-44 Trojan lead going into the final frame.

“You know, when we were up going into the fourth, I said to the guys, this ain’t over,” said Troy coach Steve Renzi. “Athens was a champion two years ago, they know. They know what they got to do to comeback, and they did.”

It began on the defensive end for the Wildcats, as they held Troy scoreless for nearly four minutes to start the fourth. That allowed them to chip away, going on an 9-0 run, with seven of them from Babcock, to cut it to 55-53.

A pair of Imbt free throws extended the lead back to four points, but a Babcock driving lay-up made it a 2-point game again.

Athens would get a turnover on their next possession, with Chimics getting fouled and going to the line for a 1-and-1. He made the first, but missed the second, giving the Trojans a little more breathing room at 60-55 with 3:15 left.

The Wildcats would have another turnover, but Troy missed at the other end.

Lister, though, was able to erase that with a lay-up plus the foul, making the freebie for a 63-60 score with just over two minute to play.

Taylor would get fouled at the other end, making both, to once again push the lead to four points.
The two teams would then trade misses, followed by Babcock getting his seventh And-1 of the game, making the free throw to cut it to 65-63 with 1:46 left.

After getting the ball back, Athens had a good look at a lay-up, but that’s when it rolled out.

Those would be the final points Athens would score, though, as their final three possessions ended with two turnovers, and a miss.

“We were a lay-up away from tying this game up with a minute left,” Lister said. “It was a fantastic basketball game in front of a packed house. It’s the way it’s supposed to be. We just came up on the short end of it.”

The Wildcats have two league games left, beginning with a trip to Towanda on Monday, and, if they win out, will be in the NTL Showdown where they could meet Troy for the third time this season.

“We have a lot of basketball left,” Lister remarked. “And we will be back. I promise you that.”