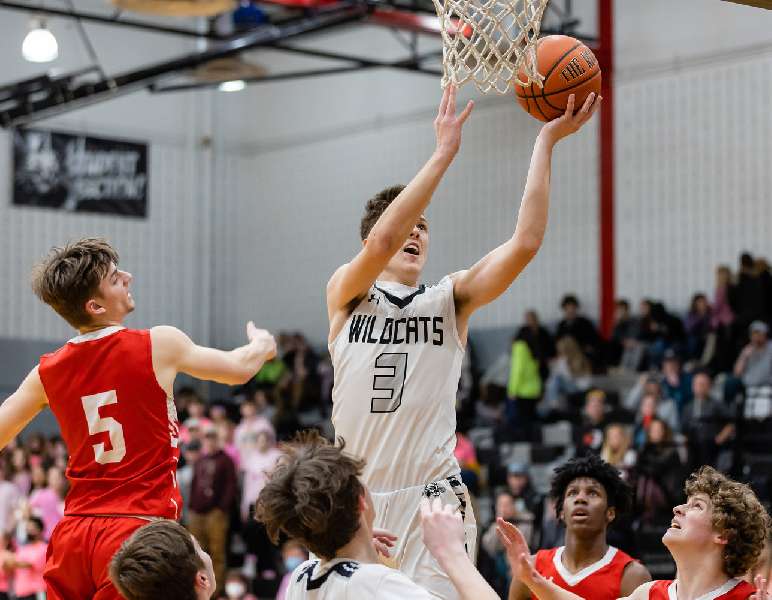 ATHENS — With two league losses already, and playing league unbeaten Troy, Athens knew this game was do-or-die if it wanted to stay in the hunt for an NTL title. And, with their backs against the wall, the Wildcats did that, beating the Trojans 61-57 in boys basketball action Monday.

“We’ve been preparing all last week, and this week,” said Athens seniorJJ Babcock, who finished with 14 points, six rebounds, six assists, and a block. “We had a couple of games last week, but we were still preparing for tonight.”

It may have been a year ago, but it was fresh in the Wildcats’ memory when Ty Barrett hit a buzzer-beating lay-up to get the win in their house, and the season sweep.
“They’ve had our number a couple of times,” remarked Babcock. “Obviously, losing to Wyalusing and Wellsboro, we needed this one big time.”
That Wyalusing loss last Friday stung as they led most of the game, but this time they were able to execute better down the stretch, especially defensively.
“I feel we can play with anybody, I really do,” said Athens coach Jim Lister. “Troy’s an excellent team, Ty Barrett is a phenomenal basketball player — I give him all the credit in the world. They came here and battled tonight.”
He was especially pleased to see his team share the ball, as iy had 18 assists on the day, while four different players hit double-figures in scoring.

“It’s awesome,” said Lister. “It’s what we talk about all the time. It’s not about one person, it’s about the team. It’s about the family, it’s why we wear it on the back of our shirts. Everybody’s got to contribute to it, one individual’s never going to beat a team, ever.”
Nalen Carling added 14 points to go with four boards, and two steals, as Mason Lister had 12 points, four rebounds, and four assists.
Troy Pritchard finished with 11 points, four rebounds, and four steals, while Tucker Brown had six points, four assists, and three steals. Chris Mitchell and Ryan Thompson both chipped in with two points apiece.
The Wildcats were able to overcome a 29-point effort by Barrett. Ethan VanNoy finished with 15 points for the Trojans, while Mason Imbt had eight points, Zeb Oldroyd netted three, and Justice Chimics scored two. Lance Heasley came off the bench to give Troy some strong defense with a few blocks.
“Ty Barrett’s going to get his points,” said Lister. “He’s that good, but you have to make somebody else beat you.”

Barrett finished the first half with 18 points, but had just 11 in the second half.

“We tried to extend our zone a little bit, kept him outside, which, I thought, we did a much better job in the second half,” Lister remarked. “He got in a little foul trouble, so he had to sit a little bit, which helped us, but I kept saying, ‘I thought we could win the game in the paint..’ I thought we can win it underneath, and they started to listen, they started to work some plays underneath, and we got some lay-ups, and got the win.”
Foul trouble plagued Troy most of the night — at one point in the second quarter Imbt, Barrett, and VanNoy were all on the bench with two fouls.
Athens came out firing, jumping out to a 14-5 lead in the first five minutes, as Carling had seven points to lead the way for the Wildcats.
After that, though, Troy — specifically Barrett — got hot. He assisted on an and-1 to VanNoy, then had scored seven points to cut it to tie things up at 15-all with 1:11 left to play.
A Brown lay-up in the final minute gave Athens a 17-15 advantage at the first horn.

The Trojans came out and took their first lead in the first two minutes of the second quarter, going on a 5-2 run, as Barrett had a free throw and a lay-up, while VanNoy added a runner.

Pritchard would get a putback to put Athens back up 21-20, but over the next minute-and-a-half Troy got cooking. VanNoy and Barrett combined to lead Troy on a 9-0 run to put them up 29-21, with a Barrett 3-ball the exclamation point.
Athens ended the streak as Lister found Babcock on a full-court pass for a lay-up to make it 29-23.
That’s when things got defensive — Heasley and Babcock would block each other from behind on back-to-back plays, but a turning point came when Barrett got his second foul with 2:32 left in the half.

He would be forced to sit, and watch as the Wildcats got to the free throw line to whittle away the lead, going 4-for-6 on three straight trips to the charity stripe to cut it to 29-28.

VanNoy came to the rescue for Troy, getting another old fashion 3-point play with 1:02 on the clock to push Troy’s lead to 32-27.

However, in the final minute the Wildcats went on a 4-0 spurt as Babcock hit two free throws, then found a cutting Brown for a lay-up to make it a 1-point game at the half.

“We went into the locker room down one, and, you know, the coaches were just like, ‘we’ve got to play defense to win this game,’” explained Babcock. “Obviously, we’re going to score the ball, we just have to stop Troy.”
The Wildcats opened the third quarter with back-to-back lay-ups to regain the lead, at 35-32. A Barrett lay-up made it 35-34, but a Babcock jumper saw the Wildcats push it back to a 3-point lead with 5:48 on the clock.

It went back-and-forth like that until the 4:13 mark when VanNoy found Oldroyd for a 3-pointer to tie it up at 39-39.

Lister responded on the next possession with a lay-up, but that’s when Troy went on another run, beginning with Barrett hitting a lay-up. Heasley then found Imbt on a nifty interior pass for a bucket, followed by VanNoy hitting Imbt for a lay-up to push the Troy lead to 45-41 with 2:33 left in the third.

Carling ended the run with a lay-up, cutting it to 45-43, but both teams struggled to score after that. Foul trouble then reared its ugly head again for the Trojans, as Barrett and Imbt were called for their third fouls with just over a minute to play.

Athens took advantage, as Thompson hit a 15-foot jumper with 45 seconds left to tie things up. VanNoy then found Chimics for a bucket with 20 seconds to go, putting the Trojans back up, 47-45.

However, the Wildcats had the final say, as Brown found Carling in the corner for a 3-ball in the final seconds of the frame to give Athens a 48-47 lead.

A Lister lay-up to start the fourth put the Wildcats up by three points, but VanNoy answered with a 3-ball to make it 50-50. An Imbt lay-up at the 6:25 mark saw Troy go up 52-50, but Athens came back with a 4-0 spurt on baskets by Pritchard and Lister.

Barrett would tie things up again with a lay-up at the 4:24 mark, but it was Troy’s last field goal of the game.

It stayed tied for more than two minutes as both teams struggled with turnovers, but a Pritchard lay-up at the 2:12 mark gave the Wildcats a 56-54 lead.

Troy would get a steal on Athens’ next possession, and an open look at three, but it was off. Barrett grabbed the offensive board, and was fouled, making both free throws with 26 seconds left to play to cut it to a 1-point game.

The Trojans put the press on, but Athens went back to an old play, as Lister hit Babcock for another full court lay-up, making it 60-57 with 18 seconds on the clock.

Troy’s last shot to tie it was off. Athens secured the rebound, with Brown going to the line, making 1-of-2, to seal the win.
The win is a good start for Athens, now 10-4, as it has a very busy week ahead — hosting NP-Liberty Tuesday, taking on CV Thursday, and hosting Dallas on Saturday.
“We have so much good basketball coming at us,” remarked Lister. “We got Liberty here, they’ve had our number the last year or two, we’ve always had to go down there to play Liberty, but they’re coming here, so we’ve got to get ready for that game.”
Dallas is the game they’re most looking forward to, as it will test where they are as a program.

“Dallas beat us pretty bad last year,” remarked Babcock. “So it’s going to be a little revenge game for us this year.”