ATHENS FALLS TO LEWISBURG, 5-3, IN CLASS 4A QUARTERFINALS 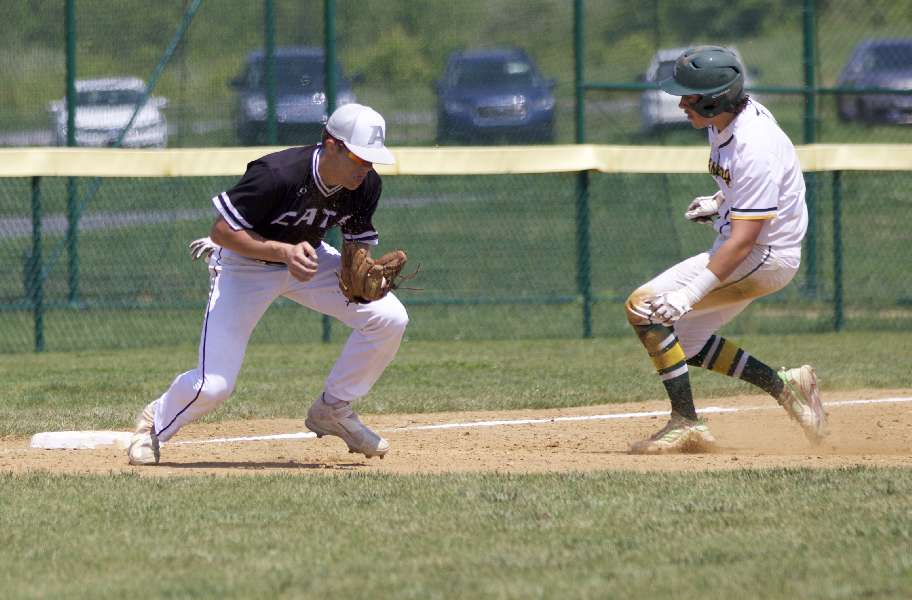 LEWISBURG — Athens outhit Lewisburg, 10-1, but the Green Dragons took advantage of base on balls, and three costly errors early in the game to pull out a 5-3 win here Saturday in the quarterfinals of the District 4, Class AAAA baseball playoffs.

“Our nerves were up in the first couple innings, and it took us some time to settle down with walks and defensive miscues,” said Athens coach Charlie Havens. “Mason (Lister) and Lucas (Kraft) did a good job not allowing the big inning, but the runs left us playing catch up all day.

“The hardest pill to swallow was we outhit Lewisburg, 10-1. We just couldn’t get that clutch hit to create the big inning,” noted Havens in reference to the Wildcats leaving 10 runners on base, including six in scoring position.

“Hats off to (Lewisburg pitcher Forrest) Zelechoski, who really settled down late,” added Havens. “It was even more impressive to do it in this heat.”

After Lewisburg ace Forrest Zelechoski pitched around a two-out single by junior Cam Sullivan in the top of the first inning, the Green Dragons scored two runs in the home half of the inning without the benefit of a hit, taking advantage of two walks, an error, and an errant throw on a dropped third strike to take a 2-0 lead.

The Wildcats closed the gap to 2-1 in the top of the second inning on a two-out double by senior Kaden Setzer, and an RBI single by senior J.J. Babcock.

Lewisburg added another unearned run in the bottom of the second, but it could have been a much bigger inning.

After an error and consecutive walks loaded the bases with no outs, Kraft recorded a strikeout, but a flyball that resulted in a double play allowed a run scoring before the third out was recorded to give Lewisburg a 3-1 lead.

Athens again trimmed the deficit in the top of the third inning.

Senior Karter Rude led off with a double, and moved to third on an error off the bat of junior Caleb Nichols. Cam Sullivan drove home a run with an RBI single to make it 3-2, but Zelechoski retired the next three batters to escape further damage.

Shea Girton led off the bottom of the third with a single — Lewisburg’s only hit, and eventually scored on a sacrifice fly off the bat of Zelechoski to push the lead to 4-2.

The Wildcats took advantage of a Lewisburg miscue in the fourth as Setzer reached second on an outfield error to lead off the inning. Babcock followed with an RBI single to close the gap to 4-3.

Rude laced a one-out single to center field to put runners on first and second, but the next two Wildcat batters were retired.

The Green Dragons used a pair of walks, and a double steal to add an insurance run in the bottom of the fourth inning, and extend their lead to 5-3.

In the top of the seventh inning, Sullivan led off with a single, but was replaced on the base paths by junior Mason Lister on a fielder’s choice.

Junior Lucas Kraft singled to put runners on first and second, but Zelechoski induced a fly ball to right field, which allowed pinch-runner Josiah Stringham to tag and take third base, and a groundout to end the game.

Sullivan singled three times and drove in one run, while Babcock singled twice and scored two runs, and Rude doubled and singled, and scored one run to pace Athens at the plate.

Setzer doubled and scored two runs for the Wildcats, while Kraft and Glisson each added a single

Kraft was tagged with the loss, allowing four runs — all unearned — on one hit, while striking out three and walking four in three innings.

Lister relieved and allowed one run, while walking four and striking out three.

“We all wanted to play a few more for the seniors,” said Havens. “That last game is always a tough one to get over.

“(Kaden) Setzer, (Karter) Rude, and J.J. Babcock all had hits,” he noted. “It was obvious they didn’t want to be done.

“They will forever be my first group and will surely be missed,” added Havens. “All had amazing high school athletic careers. I’m looking forward to watching them play different sports at the next level.”