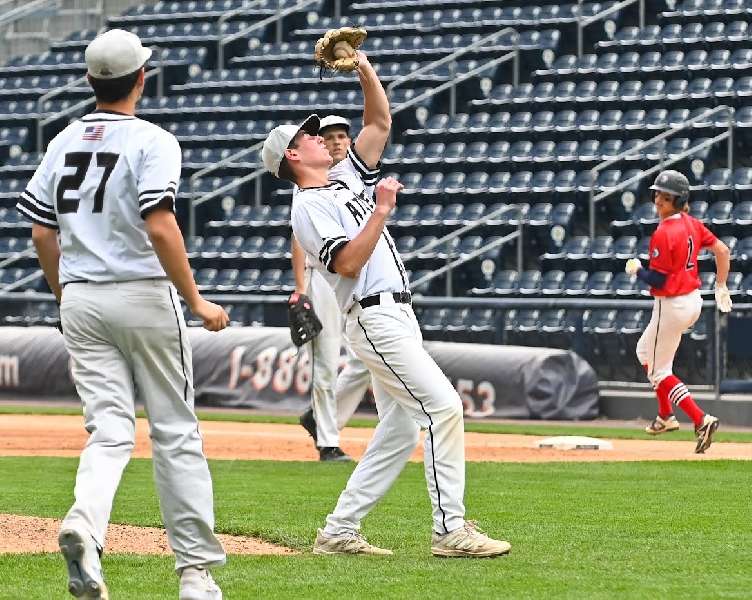 SCRANTON — Sayre poured nine runs across the plate in the second inning to erase an early deficit en route to a 15-3 five-inning win over Athens here Sunday afternoon at PNC Field.

The Wildcats took advantage of two errors after a one-out single by junior Caleb Nichols to load the bases. With two outs, junior Jaren Glisson stroked a two-run single to right field to take an early 2-0 lead.

The Redskins struck back quickly in the top of the second inning.

David Northrup led off with a triple to deep center field, and scored on an RBI single up the middle by senior Kannon VanDuzer to close the gap to 2-1.

After walks to junior Jackson Hubbard, and senior Mason Houseknecht the Redskins had the bases loaded with one out. An RBI single by senior Oakley Gorman tied the game at 2-2, and a wild pitch gave Sayre the lead for good, at 3-2.

Sayre loaded the bases again on a walk to Hubbard, and added runs on a walk to senior Dom Fabbri, and an RBI single by Houseknecht to make it 9-2.

The Redskins added two runs in the third inning by Northrup to extend their lead to 11-2.

Sayre added five runs — all with two outs — in the fifth inning in a rally highlighted by a two-RBI double by junior Kegan Hayford, and an RBI single by senior Josh Arnold to make it 15-2.

Senior Karter Rude led off the home half of the fifth inning with a single, and scored on an RBI double by Nichols, but Sayre starter Luke Horton retired the next three batters, including a strikeout for the game’s final out.

Lucas Horton earned the win for the Redskins, allowing three runs — one earned — on six hits, while striking out 11 without a walk in five innings.

Sayre improves to 17-2 and will host Troy Monday in the season finale, while Athens wraps up the regular-season campaign at 12-8.