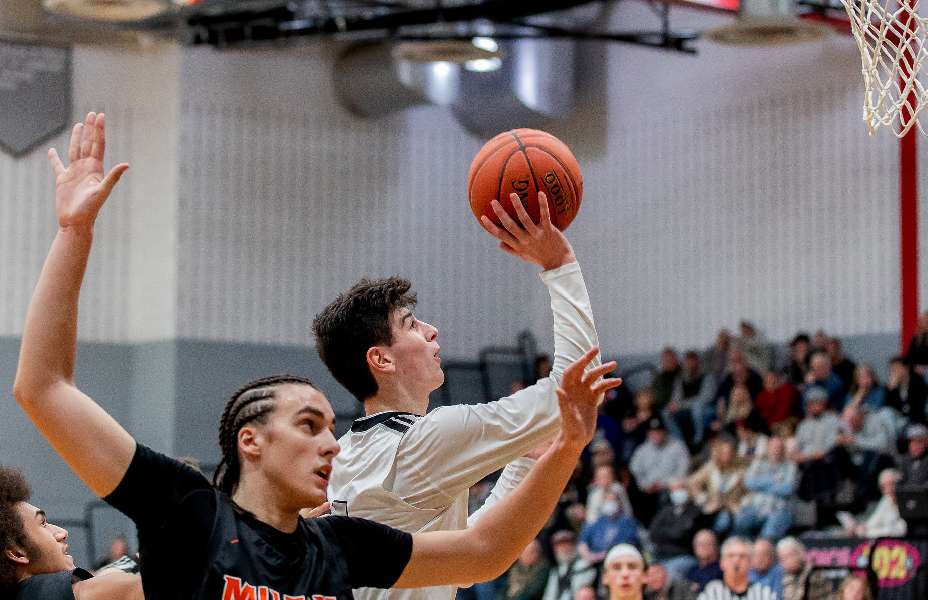 ATHENS — Athens allowed seven first-half points, limited Milton to 15-percent shooting from the field in the game, and forced 28 turnovers in a 57-23 rout here Friday night in the quarterfinals of the District 4, Class AAAA boys basketball playoffs.

“Our defense was definitely the story tonight,” said Athens coach Jim Lister. “My kids were fantastic on defense tonight. There were active, they had a lot of intensity, and their hands were busy.

“On film, it’s no secret the Heartland (Conference) match up … they match up and play man-to-man. Everything I watched on film was man-to-man.

“Playing Wyalusing and Troy, I thought their guards were better than what we saw tonight, so I thought our 3-2 (zone) would be nasty for (Milton), and it was,” noted Lister.

“When they starting figuring things out, we went to a half-court press, and it was game over,” Lister added.

The Wildcats scored the first eight points of the game, and led 10-1 after the first eight minutes, with five different players putting their names in the scoring column.

After a bucket by Milton to start the second quarter closed the gap to 10-3, the Wildcats scored nine points in a row in a run that featured four points by senior Tucker Brown, and a 3-pointer by junior Mason Lister.

Senior Nalen Carling’s puback on the offensive glass capped the run and made it 19-3 with 1:45 remaining in the first half.

The teams traded buckets to finish the half, and the Wildcats led 23-7 at the intermission.

Lister believes the 16-point halftime bulge should have been much bigger.

“If there was one thing I was all over the kids about tonight is that we were not finishing at the rim,” he said. “We missed a lot of bunnies in the first half that we normally make.

“Obviously our defensive was tremendous in the first half, but I thought we should have had another 15 points on the scoreboard,” noted Lister. “We just missed a lot of easy shots.

“We came out in the third quarter, and I think we were rushing things a little bit … we were trying too hard to score,” he added. “I took a time out just to settle them down, and we were just fantastic after that.”

Athens continued to poor it on in the fourth quarter with an 18-8 run, field by six points from senior J.J. Babcock.

Lister took a minute after the game to pay homage to the Athens student body.

“Our student body again was fantastic tonight,” he said. “They came out in droves, and they were so loud and into the game the entire time. I’m just thrilled to have them there.”

Brown had eight points, six assists, four rebounds, and three steals in the win,, while Pritchard had six points and six boards, and junior Chris Mitchell chipped in with five points.

Athens, now 19-6, will face second-seeded Shamokin at a time and place to be determined.

“We had eight alumni at the game from Athens (and SRU) who were 1,000-point scorers to recognize them, and celebrate J.J.’s accomplishments,” said Lister. “I think it was a wonderful thing for J.J. (Babcock), I’m thrilled for him.