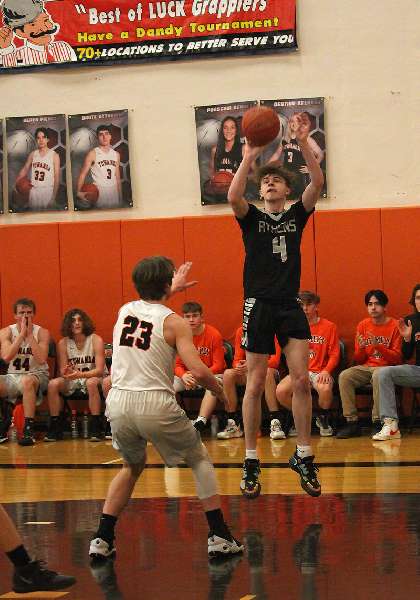 He needs just four boards Wednesday against Williamson to reach 500, which would be his second milestone in less than a week. He scored his 1,000th point in a win over Wellsboro Friday.

“That’s actually very nice,” Babcock said about getting two milestones his senior year. “It’s something I’ve been working toward for a long time.”

The Wildcats led by just five points at the half, but rattled off a 45-16 run in the second half to get the win, playing their fourth game in six days.

“We knew Towanda was going to bring it,” said Babcock. “Coach (Landon) Henry is a really good coach. We just had to fight through the adversity, and come out on top.”

Dante Ottaviani and Teagan Irish had 11 points each to lead the Knights, while Justin Schoonover added nine, and Mason Hartmann chipped in with eight.

Irish would respond with a lay-up, but a Carling jumper, followed by a Keathley putback pushed Athens’ advantage to 15-10.

An Ottaviani 3-ball cut it to 15-13, but another Carling bucket pushed it back to a 4-point lead for the Wildcats.

However, Towanda ended the quarter on a 6-2 run, thanks to threes from Wheaton and Irish, to knot things up at 19-19 at the quarter break.

Athens came out strong in the second, going on a 6-0 run as they turned three straight steals into three straight lay-ups — two by Babcock.
Towanda would get a lay-up from Hartmann, followed by a 3-ball from Ottaviani, to cut it to 25-24, but a Lister 3-pointer made it 28-24, and Babcock would score off a Carling assist to make it 30-24.

Ottaviani would answer with a 3-pointer to trim the deficit to 30-27.

In the third quarter, the Wildcats blitzed Towanda with a 10-0 burst, led by six points from Lister, to take a 44-29 lead.

Hartmann would get a lay-up to stop the bleeding, but it started over again, as Athens went on an 8-2 run, as four different players scored, to make it 52-33.

“We definitely amped up the intensity,” said Babcock. “We knew we had to bring it.”

Athens will need to beat Williamson on Wednesday to advance to the NTL Showdown, where they would travel to Wyalusing, a match-up they look forward to, as the Rams beat them earlier this season.

If they beat Wyalusing, they could likely face Troy again in the NTL Showdown finale, so they still have plenty play for, including some revenge.

“We can’t wait to play them again,” said Babcock. “Those are the two great games for sure.”