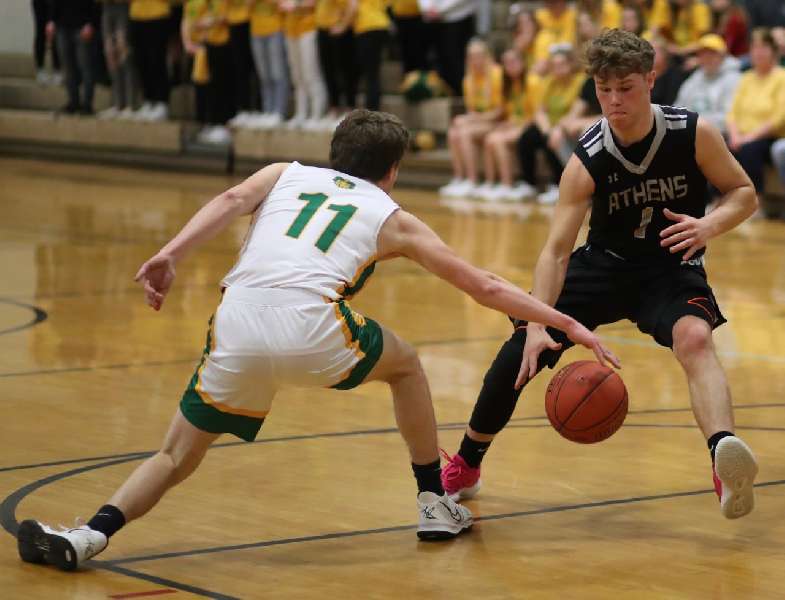 WYALUSING — The Wyalusing Rams came out firing in the NTL Showdown on Thursday night, but Athens had the answer every time in a 74-69 win.

Wyalusing hit 11 threes in the game, but the Wildcats had four players in double figures, and were led by a 29-point, 10 assist effort from J.J. Babcock in the win.

“First, congratulations to Wyalusing for one of the best shooting performances I have seen in a long time,” Athens coach Jim Lister said. “I am very proud of our kids. They stuck to the plan tonight and got us a big win. Wyalusing is not an easy place to play.”

Wyalusing hit five first-quarter threes, with Isaiah Way hitting three of them, on his way to 11 first-quarter points, and Grady Cobb knocking down two in the quarter.

But, Athens kept the game tied at 19 after one as Nalen Carling had seven points, including a three, and Babcock had six points. Tucker Brown finished with four in the quarter and Mason Lister scored a basket in the quarter.

In the second quarter Babcock started to take over with eight points, and Lister drained two from distance as the Wildcats outscored the Rams 20-12 in the quarter to take an eight-point lead into the half.

“J.J. Babcock was outstanding tonight, once again,” Lister said. “I keep saying he has become the complete player and he proved it again tonight.”

Wyalusing went inside in the third as Blake Morningstar scored 13 points in the quarter and the Rams outscored the Wildcats 22-18 in the third to cut the deficit to 57-53 heading into the fourth.

Babcock led the Wildcats in the third quarter with nine points, including a three.

In the fourth the Wildcats sealed the win by going 11-for-15 from the free throw line.

Babcock was 11-for-18 from the field in the win and he was 7-for-10 from the free throw line to help seal the win.

Along with his 29 points and 10 assists, Babcock added three steals, a blocked shot and six rebounds.

Carling finished with 16 points for the Wildcats and Brown had 13 points with four assists. Brown was 5-for-8 from the field in the game.

Lister had 12 points and four rebounds, with three assists and a steal.

Troy Pritchard and Keathley each finished with two points in the game.

Athens shot 52% from the field in the game and they hit 16-of-23 from the free throw line in the win.

Cobb led Wyalusing with 22 points and four assists and Morningstar had a double-double with 20 points, 18 in the second half, and 12 steals, along with seven rebounds.

Nolan Oswald and Abram Bennett had two points each for the Rams.

Athens will face Troy for a third time this year in the NTL Showdown Final. Troy won the other semifinal 78-54. The game is at 4 p.m. Saturday at Sayre.

“Another terrific team win by the Athens Wildcats,” Lister said. “We are looking forward to another war with the awesome Troy Trojans on Saturday afternoon, especially with a days rest this time.”