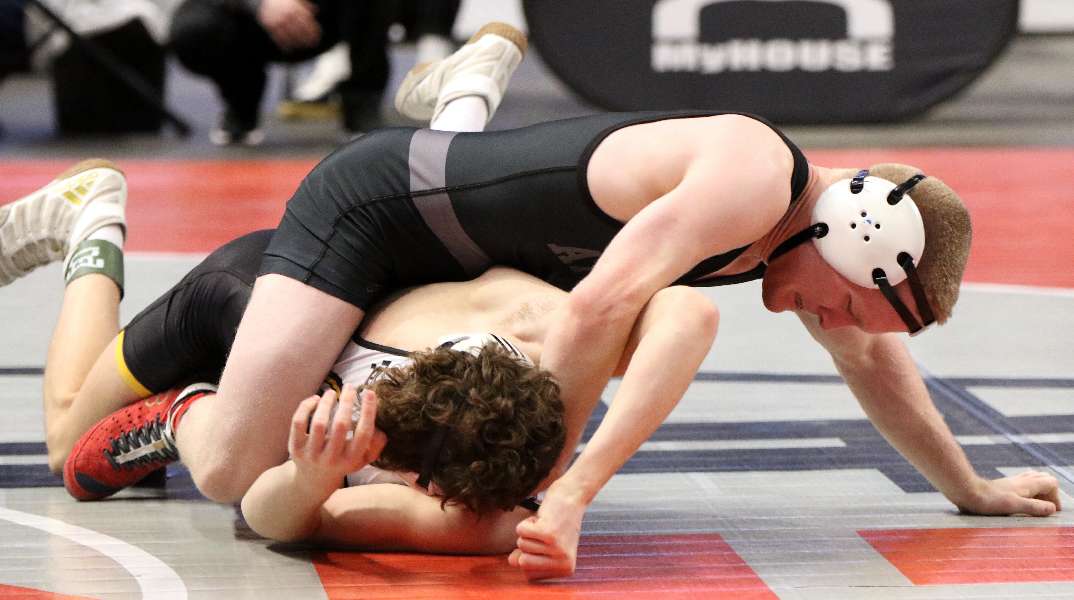 HERSHEY — Once Athens senior Gavin Bradley caught up to Quaker Valley sophomore Jack Kazalas, it was all over — a third-period fall here Friday morning to advance to the 113-pound semifinals of the PIAA Class AA Wrestling Championships at The Gian Center.
The win was the 150th of Bradley's career.
The Athens coaches are still waiting for Bradley, now 37-1, to cut loose and wrestle the way he’s capable.

“Gavin is just looking to advance right now, instead of performing,” said Athens assistant coach Jay White. “He just needs to go out and have fun and wrestle. When he does that, there’s not a person in this gym who is going to touch him.”

Kazalas spent the large majority of the match back-pedaling, which drew a stall warning midway through the first period.

“That kid watched a lot if film, you could tell,” said White. “(Kazalas) wrestled a smart match against Gavin.

“But Gavin kept him in the match,” noted White. “He didn’t give his best effort, and that kid is really good.”

After ore than 90 seconds on their feet, Kazalas got in deep on a double-leg for a takedown and a 2-0 lead, but Bradley escaped immediately to trim the deficit to 2-1.

Bradley registered another escape early in the second period, then scored a quick takedown after a re-start midway through the stanza to take a 4-2 lead. Following a Kazalas escape, Bradley led 4-3 entering the final two minutes.

Bradley cut Kazalas to start the third period, and scored a takedown 12 seconds later. Bradley quickly put the legs in and quickly turned him with a power-half for the fall at 4:25.

“Once he decided ‘this isn’t working, I’m going to start wrestling,’ it was no contest,” said White.

“He kept the kid in the bout by wrestling a little tentative,” noted White. “He’s thinking ‘it’s the state quarterfinals, if he wins he’s in the semifinals and guaranteed of a medal,’ but he’s not looking for a medal, he’s got a bunch of them. He’s looking to get to the top step of the podium.

“He’s worried he’s not going to get there, and he’s got to stop thinking like that,” added White. “He’ll be fine, it’s just a matter of performing like he’s capable. If he keeps performing like he did in the third period, there’s no one in this arena that can touch him.”

Bradley will square off with Faith Christian Academy freshman Gauge Botero (43-6) tonight in the semifinals.