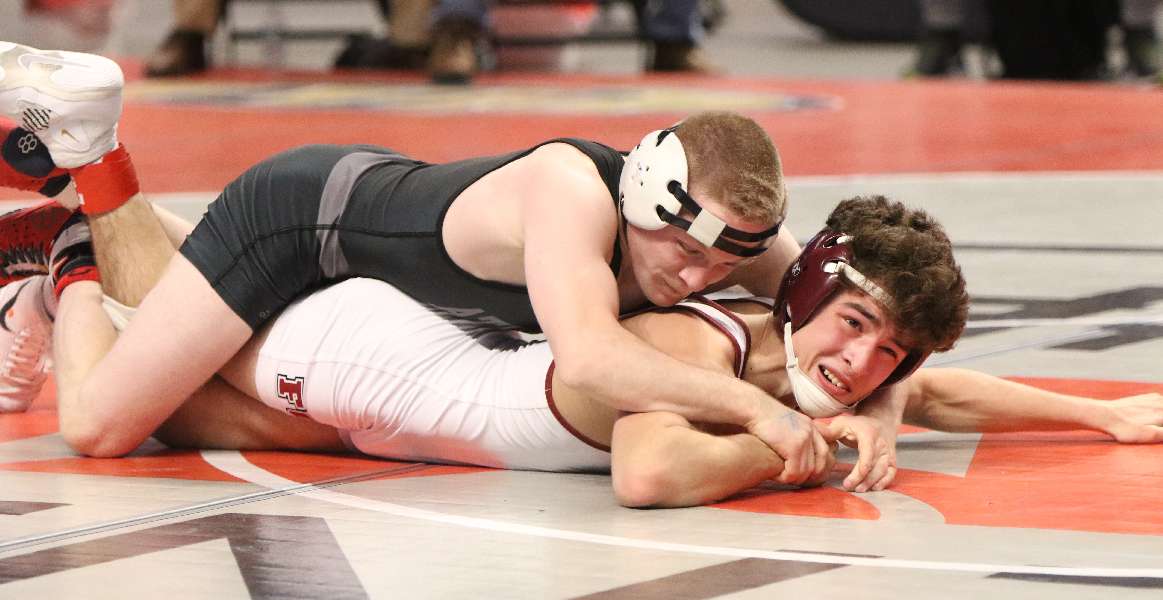 “We had a game plan, and Gavin stuck to it,” said Athens coach Shawn Bradley. “He did what he needed to do.

“(Botero) is good,” noted Shawn Bradley. “We went back in between sessions and watched 10 or 15 matches and that kid was wrestling hammers the whole time. He had a great schedule, and he was ready to go.

“Gavin did what he to do,” added Shawn Bradley. “It was a great performance.”

Bradley got in on a single-leg about 10 seconds into the match. With 24 seconds remaining, following a 86-second scramble, the match was re-started due to a stalemate call.

“That was one of the best scrambles I’ve seen from Gavin,” said assistant coach Jay White.

“That was great because in the quarterfinals, the coach behind us was yelling ‘he can’t scramble, make him scramble.’ Well, I guess he can scramble after that one,” laughed Shawn Bradley.

After the re-start, Bradley got in on another single-leg, and finished this one to take a 2-0 lead after the first two minutes.

Botero chose bottom to start the second period, but Bradley, who is very strong on top, chose to cut him, closing the gap to 2-1.

Bradley scored another takedown with 21 seconds remaining in the second period to take a 4-1 lead heading into the final two minutes.

Bradley chose neutral to start the third period, instead of taking top.

“That kid scores a bunch of his points from bottom,” said Shawn Bradley. “He almost beat the No. 1 kid in the country from the bottom … turned the kid, scored five and almost beat him.

“We had two takedowns and were up 4-1, we didn’t need to prove anything,” he noted. “We just needed be smart and get another takedown.”

Midway through the third period, Bradley was in on a single-leg, but the official whistled for blood time for Botero before he could finish it off.

“When we had the blood time, I told Gavin ‘don’t shut down, get another takedown,’” said Shawn Bradley. “He didn’t get one, but he wrestled hard. They both wrestled hard … there weren’t any takedowns in the final minute, but it was action-packed.”

Bradley, who recorded his 150th career win in the quarterfinals, is 38-1 on the season.

Prior to the season, many pundits expected Bradley to win a state title, or at least reach the state finals.

Shawn Bradley said those same thoughts were on the mind of Gavin Bradley prior to the quarterfinals and semifinals.

“That’s what I spent the last two hours (before the match) trying to do, was simplify that.

“I told Gavin, ‘it’s not about the state finals. It’s a wrestling match.’ If that match is in the summer, I expect the same outcome,” he said.

“I told Gavin ‘just wrestle six minutes,’” noted Shawn Bradley. “In the quarterfinals, he’s thinking ‘what happens if I lose?’ … you can’t do that, this is too big of a stage, and these kids are too good.

“You just have to score points, and if you score points, good things will happen,” he continued. “If not, you could leave it up to the referee, or a freak takedown.

“You’ve seen him wrestle 100 times, he goes a millions miles an hour — it’s all go, no brakes,” added Shawn Bradley. “That’s the way he wrestles, if he stays that way, it’s going to take a really great effort to beat him.”

Bradley will wrestle a familiar adversary in the finals in Montoursville junior Brandon Wentzel, who is 41-3 on the season.

Wentzel, who has a first- and third-place finish at States, topped Bradley, 5-3 in the finals of the District 4 Championships, while Bradley, who has finishes sixth, seventh, and second at States, won 11-8 last week in the finals at the Northeast Regionals.

Wentzel advanced to the finals with a 3-2 win in ultimate rideout over West Perry senior Deven Jackson.

Does wrestling the same opponent three weeks in a row play to Bradley’s favor?

“I think it works both ways,” said Shawn Bradley.

“Hopefully, Gavin doesn’t care who he wrestling tomorrow. He was waiting to see who won, I told him ‘it doesn’t matter, just go out and wrestle.’

“He’s wrestled both those kids and they are both super-tough,” noted Shawn Bradley. “It’s the PIAA state tournament, you’re going to wrestle a hammer in the state finals.

“(Wentzel) has one loss at Hershey in his career,” added Shawn Bradley. “Gavin has to go out tomorrow and wrestle his match, and not let Brandon control the tempo or the positions. If he wrestles his match and his positions, it will come out the way he wants.”

The finals are set for Saturday at 2 p.m.