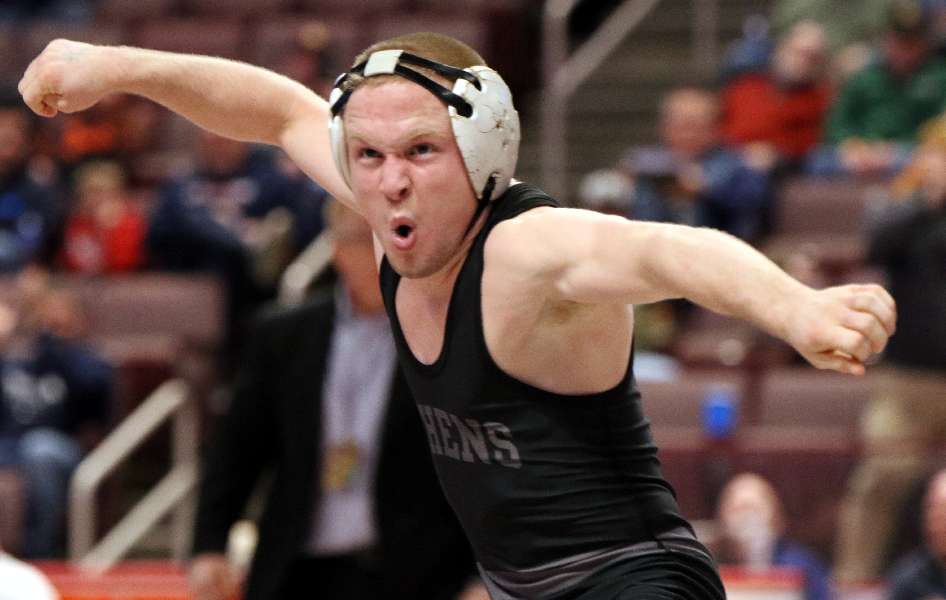 HERSHEY — Athens senior Gavin Bradley has tasted defeat on PIAA’s biggest stage, and he didn’t want to feel that way again. His takedown late in the third period lifted him to PIAA gold in the 113-pound bracket here Saturday afternoon in the Class AA Wrestling Championships at the Giant Center.

Bradley scored a takedown with 21 seconds remaining to take a 4-2 lead over Montoursville’s Branden Wentzel on his way to a 4-3 decision.

“I took a piece of paper and wrote down all my feelings after losing in the state finals,” he noted. “I took that and taped it to the ceiling above my bed, so I wake up to those emotions every single day.

“I wake up to those feeling every single day, and I didn’t want to feel like that again,” added Gavin Bradley.

“The only thing you can control in life is your effort, and the time you put into the things you love,” he said. “You have to figure out what you want to do in life, love that, and go after it with everything you have.

“I’ve wanted this a long time, ever since I was a little kid,” added Gavin Bradley. “I’ve dreamed of this moment.”

The state title is culmination of years of hard work, said his coach (and uncle) Shawn Bradley.

“Gavin didn’t really start wrestling until he was in fifth- or sixth-grade, so he’s a late bloomer, but he came to me and said ‘I want this,” so I said, ‘let’s do it.’

“Compliments to his father (Kyle), he took him wherever he wanted to go,” said Shawn Bradley. “He wrestled every summer, he wrestled 100 matches every offseason.

The match started out slowly with a pair of blood stoppages in the first minute for a cut on the bridge of Wentzel’s nose.

After a scoreless first period, Bradley deferred, then cut Wentzel when he chose to start on the bottom.

Two more blood stoppages slowed the action in the second period as well, and Wentzel maintained a 1-0 lead entering the final two minutes.

Bradley chose bottom to start the third period, and registered a reversal just 17 seconds in to take a 2-1 lead.

Following a stalemate with 1:01 remaining, Bradley cut Wentzel loose to tie the bout at 2-2.

After another stalemate with 35 seconds remaining, Bradley got in on a single-leg and kept both his feet in-bounds as he corralled both Wentzel’s legs for the takedown with 21 seconds left for a 4-2 lead.

“I was just trying to wrestle smart, wrestle my match, and execute the things I needed to do,” said Gavin Bradley. “It was a takedown. It wasn’t one of my best takedowns, but it was a takedown, and it won the match.”

After a re-start with 20 seconds remaining, Wentzel escaped with 8 seconds left to close the gap to 4-3.

Bradley was warned for stalling with 2 seconds remaining, and fended off Wentzel’s final takedown attempt at the horn to preserve the win.

The majority of the match was spent near the edge of the circle, but both Bradleys expected that.

“That’s kind of (Wentzel’s) style,” said Gavin Bradley. “He’s a good wrestler, but he does stall a little bit.

“At the hotel last night, we watched the last couple matches,” said Shawn Bradley. “I asked the assistant coaches how the match would go, and I told them they were out of their mind. I thought we’d get three takedowns, but they were right.

“We knew if we shot the single-leg we’d be in trouble, so I told Gavin ‘don’t shoot the single-leg,’ and he stayed away from it, all but one time. His hands stayed down … he gave up his legs one time, but other than that he did exactly what he was suppose to do.

“One of our struggles has been him trying to adjust during the match,” noted Shawn Bradley. “It was a struggle last year in the state finals. He did exactly what he was suppose to do today … made an adjustment, got his one takedown, and stayed calm, cool, and collected.

“He had to get an escape, which we don’t … when was the last time Gavin was down?,” added Shawn Bradley. “Instead, he got a reversal, so he did everything he had to do.”

For Shawn Bradley, the win was doubly-sweet with his nephew reaching the top step of the podium.

“Much like my own sons, (Gavin) got the brunt of things, and the other kids will tell you the same,” said Shawn Bradley. “It was on Gavin more than anything.”

“I’m so proud of him,” added Shawn Bradley. “He deserves it, he really does.”

Following the win, the usually-stoic Gavin Bradley did a couple of victory laps, and pumped his fist emphatically at the Athens contingent in the stands.

Even Shawn Bradley was surprised by Gavin’s celebration.

“He such a great kid. He’s so humble … I looked at Jay (White) and almost asked what’s going on right now … but that’s Gavin,” laughed Shawn Bradley. “There’s always a surprise, you never know what you’re going to get.”

Bradley finishes his career with a 152-19 record. He is third on the all-time wins list behind David White’s 163, and Brian Courtney’s 153.

Bradley said he is deciding between four colleges, including Central Michigan, Castleton, and Delaware Valley.