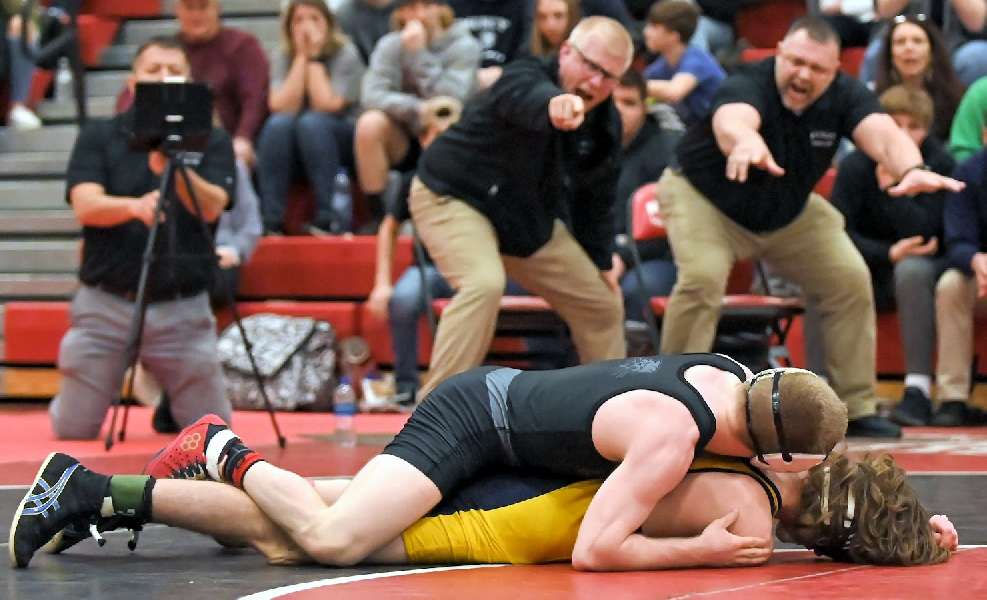 Bradley avenged his only loss of the season — a 5-3 setback in the District 4 finals last week — with a wild 11-8 win over top-seeded Branden Wentzel of Montoursville in the 113-pound finale to win his third consecutive Regional title.

“Gavin is going to wrestle hard for six minutes, or however long the match is no matter what,” said Athens coach Shawn Bradley.

“I think he fixed some stuff tonight,” he noted. “He stayed in position, and position is huge in wrestling. Last week, he gave up position a couple of times, and Wentzel is a tough kid — he capitalized on it.

“He stayed in position a lot better, got to his offense, and gutted it out when he had to,” Bradley added.

Bradley scored a takedown with 1:11 remaining in the first period to take a 2-0 lead, but Wentzel recorded a reversal with 21 seconds left to tie it at 2-2.

Wentzel registered an escape off the second-period whistle for a 3-2 lead, but Bradley answered with a pair of takedowns for a 6-4 lead with 41 seconds remaining.

Wentzel scored an escape late in the second period, then hit for a takedown early in the third period for a 7-6 lead.

Bradley escaped with 1:25 left in the third period to tie the bout at 7-7, then connected on a pair of takedowns, including one with 12 seconds remaining to seal the victory.

Previously, Gavin Bradley, who pinned Wyoming Area’s Garret Pocceschi in 74 seconds in the quarterfinals Friday, sewed up his trip to Hershey with a pin of South Williamsport’s Kayvan Shams in 2:38 in the semifinals.

Rude, the third seed at 152 pounds, opened the tournament Friday night with a 5-2 win over Honesdale’s Joey Gianetti, 5-2.

Rude punched his ticket to States in the semifinals with a 5-0 win over second-seeded Cooper Price, who was 28-1 entering the bout.

“Coming into this year, Karter (Rude) had never even placed at Districts,” said Bradley. “This year, he takes second at Regionals, and he beats a kid who is undefeated in the semis. That’s cool.”

Rude’s quest for a Regional title came up short with a 9-1 loss to top-seeded Devon Deem of Montgomery in the finals.

“He closed the gap on Deem, and Deem is tough,” said Bradley.

“Karter has wrestled some really good kids in that weight class this year, the top three, four, five kids in the state.”

Bradley believes Rude is primed for good things in Hersehy.

“Karter is peaking just at the right time,” he said. “He’s right where he needs to be right now.

“Karter is a great athlete,” noted Bradley. “The keys for him are head position, his hands are super-heavy, and he’s got great attacks.

Junior Jake Courtney and sophomore Josh Nittinger, who both lost pigtail-round matches, were eliminated with losses in their first wrestleback matches Saturday morning.

“They both had great seasons,” said Bradley. “When you come down here, you have to fight through some tough kids to advance. They both battled, came up a little bit short in both matches, but they battled.

“I think Josh wrestled more matches than anyone in this tournament,” said Bradley. “He wrestled almost 50 matches, which is awesome. He showed me a lot this year as far as working hard, and wanting to learn.”

Action at the PIAA Class AA Championships begins Thursday morning at the Giant Center in Hershey.