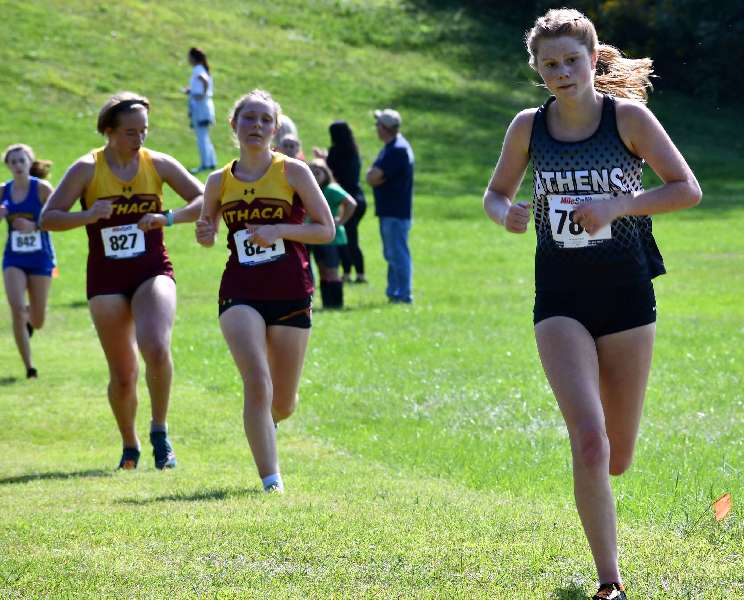 "Today was a good start for us on both the boys and girls sides of things,” said Athens boys coach Mike Bronson. “For our more experienced kids like Ethan Hicks, and Emma and Sara Bronson it was a good rust-buster and good for them to get back into a race.

“It gave our younger or new runners a good opportunity to gain some experience in a bigger race,” noted Bronson. “For the guys, we ran a pretty young group in the varsity race today, we had one senior (Nate Prickitt) and then the rest were freshman or sophomores, so they need some time to just gain experience running at that level.

“We know we still have work to do, but I'm pretty happy with where we are for this early in the season,” added Bronson.

"The kids have been anxious to get a race in and we were excited to see where they stand,” said Athens girls coach Scott Riley.

“The team has a good balance on youth and experience,” noted Riley. “For many kids on high school and junior high teams, this was their first cross-country race ever. We were pleased with how they ran with a good opener across the board. In all the races, we had some really good standout performances with top place finishers.

“Today definitely gave us a good sampling of where we are starting the season and that’s pretty exciting,” added Riley.

Ithaca cruised to the team title with 47 placement points, while runner-up Union-Endicott had 69 points, third-place Horseheads had 89 points, Oneonta was fourth with 112 points, and Athens tallied 127 points.

In the junior varsity race, Athens finished sixth of the six complete teams.

JUNIOR HIGH
Boys
All five of Athens’ scorers, led by Graham Wanck, finished in the top 10 to lead the junior Wildcats to the team title in the junior high division.

"In the Junior High races, the boys ran a really nice team race today with six of them finishing in the top 12 of their race,” said Bronson. “in the girls race, Alissa Vough, in her first race, ran a great race to finish a really close second"

Athens claimed the team title with 24 placement points, while Delhi was runner-up with 38 points, and Union-Endicott was third with 84 points.