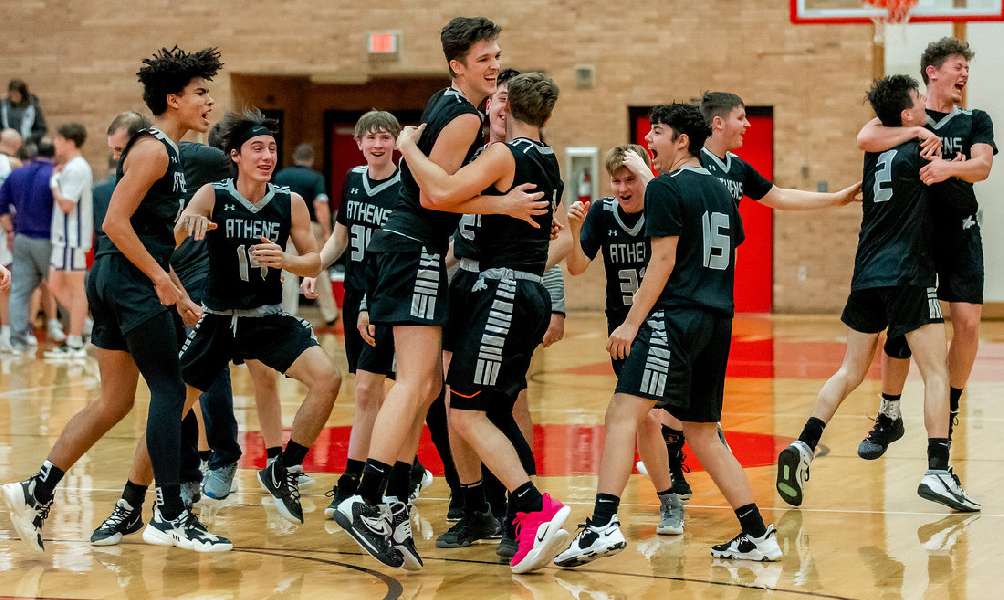 WILLIAMSPORT — Senior Tucker Brown buried two free throws with 16 seconds remaining to lift Athens to a 41-40 win over Shamokin, and into the District 4, Class 4A championship game.

“I’m so proud of them,” noted Lister. “When you go down to Williamsport, it’s a different level of basketball. It’s a lot more physical, they let you play a lot more.

The Wildcats finished the third quarter with a 6-0 spurt — on a pair of buckets by senior Nalen Carling, sandwiched around a short jumper by senior J.J. Babcock — to take a 31-25 lead into the final eight minutes.

Babcock scored again, off a feed from junior Mason Lister, to give the Wildcats their biggest lead of the game, at 33-25, with 7:35 remaining in the contest.

Shamokin scored the next eight points to take a 38-37 lead with 1:48 remaining, but a steal by Babcock and a long pass to junior Chris Mitchell for an uncontested lay-up with 44 seconds left gave Athens a 39-38 lead.

"How about that pass to Chris Mitchell?,” said Lister. “Seriously, a half-court bullet right there for a
lay-up. That's part of being 6-6, being able to see the floor and finding his wide-open teammate."

Just eight seconds later, Shamokin made a pair of free throws to regain the lead, at 40-39, setting the stage for Brown’s game-winners.

“It was a big-time moment for a senior,” said Lister.

“We practice foul shooting a lot in practice, and Tucker kind of goes off to the side by himself,” he noted. “He’s constantly working on it, and it paid off tonight.”

“It seems like every time we face a team, they come out in the first quarter and they hit their first two or three 3-pointers,” laughed Lister. “Shamokin made their first two, and then missed a bunch after that.

“I think our 3-2 zone was frustrating for them. They were having a difficult time getting the ball inside.

“I’ve watched a lot of Heartland (Athletic Conference) film, and it’s no secret, they all play man-to-man defense,” noted Lister. “Every game I watched, it’s man-to-man.

“We’re playing this zone, and they’re just not use to seeing it. With our length and athleticism, these guards struggle with it.

“We forced a lot of turnovers tonight, it’s been our type of basketball,” added Lister. “We’re going to stick with it.”

Shamokin led 12-4 midway through the first quarter, but Lister scored back-to-back buckets to close the gap to 12-8 at the end of the opening eight minutes.

After a free throw by Shamokin to open the second-quarter scoring, senior Troy Pritchard scored on a nice low-post move to trigger a 7-0 spurt that Brown capped with a steal and uncontested lay-up to give the Wildcats a 15-13 lead.

The teams battled evenly until Athens’ 6-0 spurt to end the third quarter.

Lister added four points, four rebounds, four assists, and six steals in the win, while Pritchard had six points and four rebounds, and Mitchell chipped in with five rebounds and one blocked shot.

The Wildcats, now 20-6, are just one win away from a District 4 title.

“That’s one banner in our gym we just don’t have for Athens boys basketball,” said Lister.

“The kids have bought in, and are playing some really good basketball,” Lister added.

Athens will face the winner of Wednesday’s game between top-seeded Lewisburg and fourth-seeded Mifflinburg on Saturday at a site and time to be determined.