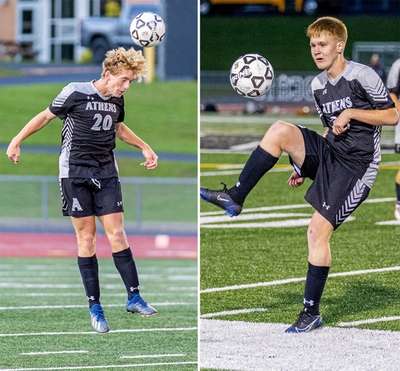 ATHENS — Athens junior Alex Campbell was named the NTL’s “Defensive Player of the Year,” and junior Korey Miller was tabbed a first-team-all star, while three of their teammates also earned recognition recently in voting by the league’s coaches.

Wellsboro’s Todd Fitch was named “Coach of the Year,” after leading the Hornets to an unbeaten league record.

FIRST TEAM
Strikers
Korey Miller, junior, Athens: A heady player with a knack for getting in position to score, Miller led the Wildcats with 13 goals, and was second on the team with six assists.

Defense
Alex Campbell, junior, Athens: Athletic, physical, and possessing a high soccer iQ, Campbell anchored the Wildcat defense. He had one assist on the season.

Midfielders
Brayden Post, senior, Athens: Athletic, with a high soccer IQ, Post could be counted on to be in the right place. He was second on the team with 11 goals, and had two assists.

Selected to the second team in the midfield were: Galeton senior Matt Smith, Troy junior Brady Spalding, and Williamson junior Will Gehman.

HONORABLE MENTION
Strikers
Marco Quiros, sophomore, Athens: A fiery player with good foot skills, Quiros made an impact in his first year with the Wildcats. He had six goals and one assist.

Midfielders
Mitch Hamilton, junior, Athens: A skilled player, his defense and passing often flies under the radar. He had two goals and four assists on the season.