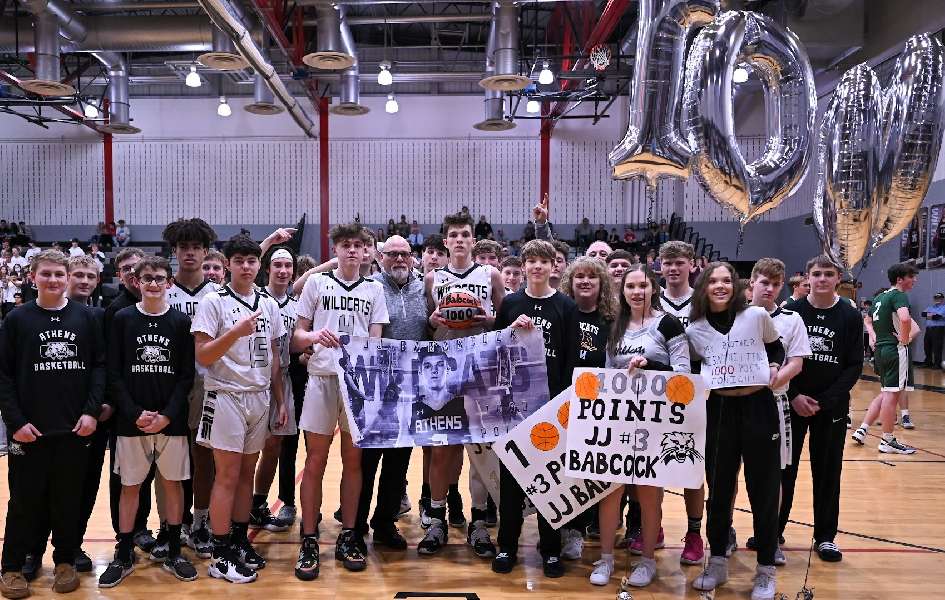 However, Athens coach Jim Lister said it was his team’s defense, employing 1-3-1 half-court pressure, that was the difference.

“Defensively, I thought we played awesome in the first half,” he said. “We only gave up 15 points to a very good Wellsboro team … if we continue to play defense like that, we should be OK.

“I went back over the last 48 hours and I watched our game (at Wellsboro) three times,” noted Lister. “I realized (Wellsboro’s) guards are very good shooters, but I thought we could put some more pressure on them, which we did not do the first game, and make it a little more difficult for them.

“Our length and athleticism created a lot of problems for them,” added Lister. “I don’t think they saw that coming.”

The 6-3 Carling, matched up against a 5-10 defender, scored 10 points in the first quarter, including a pair of feee throws that gave Athens the lead for good at 6-4.

“We didn’t have Nalen (Carling) at Wellsboro, he was very ill and did not make the trip,” said Lister.

“Watching film and looking at the match-ups … I thought we’d have a size advantage with Nalen,” added Lister. “I thought Nalen would be the x-factor, and dominate in the paint, and that’s exactly what he did.”

After a 3-pointer by Wellsboro’s Connor Adams closed the gap to 8-7, Lister drained a long 3-pointer from the right wing to trigger a 13-1 run that put the Wildcats ahead 21-8 with 2 1/2 minutes remaining in the first half.

Carling and Lister scored buckets to give the Wildcats their biggest lead of the first half, at 27-13, with 40 seconds remaining in the half, but Liam Manning scored on a putback at the buzzer to make it 27-15.

Peyton McClure, who scored a game-high 21 points on seven 3-pointers in the first Athens-Wellsboro game, canned his second 3-pointer of the game to close the gap to 29-20 with 5:29 remaining in the third quarter. McClure finished the game with two 3-pointers and eight points.

“We had Mason (Lister) on (Peyton McClure) in the second half, and his job was to make sure he didn’t hurt us,” said Lister. “We did a good job on him.”

Adams knocked down a jumper in the lane to make it 29-22 with 5:16 remaining, but senior Troy Pritchard and Babcock scored in the low blocks to make it 33-22 with 3:08 remaining.

The teams traded buckets, with Liam Manning scoring in the post with 50 seconds left to close the gap to 35-26 heading into the final eight minutes.

Carling scored on a nice drive down the lane with 6:25 remaining, but Adams drained a 3-pointer just 10 seconds later to make it 37-29.

Drew Manning scored on the offensive boards midway through the final stanza to make it 39-33. After a defensive stop, the Hornets had a chance to cut deeper into the Athens lead, but Babcock came up with a steal and coast-to-coast drive for an old-fashioned three-point play to make it 42-33 with 3:22 remaining.

Babcock made 2 of 5 free-throw attempts over the next two minutes, but the Wildcats kept Wellsboro off the board.

“That was probably my mistake,” said Lister of Adams’ consecutive 3-pointers. “I switched us into man-to-man, and I probably should have stayed with the half-court press a little longer because (Wellsboro) was struggling to get the ball up the court.

“We stayed in man, and we packed it too deep,” noted Lister. “We let (Adams) get to the top-of-the-key, and he hurt us.”

“We called timeout, and fixed that real fast,” added Lister. “Then, they had no choice, but to foul us.”

The Wildcats, who made just 8 of 19 free throws in the game, made 3 of 6 free throws, including Babcock knocking down one from the charity stripe with 20 seconds remaining in the game for his milestone point.

“We didn’t shoot fouls shots very well tonight,” said Lister. “If there’s one thing that bothered me tonight, it was our foul shooting. We can’t do that (Saturday) night at Troy, we have to make those shots.

“We’ll spend some time on the foul line (Saturday) before we go to Troy, I guarantee you that,” Lister added.

“I’ve been coaching J.J. since the third-grade, so I’ve watched him grow and develop over the years.

“Does it help that he’s 6-foot-6? Yes,” said Lister. “But, it’s the other parts of the game that make him the player he is … he has an incredible basketball IQ, and he has the frame to go with it.

“It’s an awesome accomplishment. I’m very happy for him,” he added.

Pritchard chipped in with four points and six rebounds in the win, and junior Mason Lister had five points, three boards, three assists, three steals, and one blocked shot.

With the win, Athens remains 1 game behind Troy in the Large School standings. The Wildcats travel to Troy Saturday night.

“We just have to keep our foot on the gas, and keep going.

“Troy is a big one tomorrow night, I’m sure that’s going to be a packed house,” added Lister. “We have to bring it, and be ready.”

Lister continues to be impressed with the support his teams has received from the student body.

“A huge shout-out to the student section, they were awesome again tonight,” he said. “The school spirit is incredible, and I hope they all come to Troy (Saturday) night.”