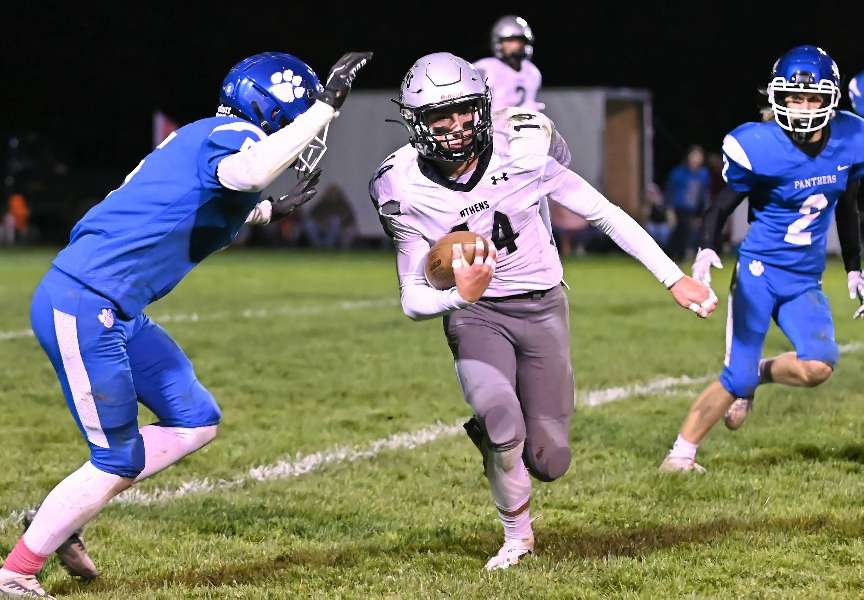 Keathley rushed for 156 yards, and also had TD runs of 18 and 2 yards, while senior tailback Caleb Nichols rushed for 38 yards and one TD on 10 carries, and had one reception for 70 yards in a night of big plays for the Wildcats.

Athens got on the board early on a 23-yard TD pass from senior QB Mason Lister to junior Josh Martin. Lister’s PAT kick made it 7-0.

Keathley’s first TD run of 2 yards made it 13-0 at the end of the first quarter.

Keathley broke loose on a 75-yard TD run on Athens’ next possession, and Lister’s PAT boot made if 20-0.

Athens cashed in on a North Penn-Mansfield with a short scoring drive, capped by a Nichols 5-yard TD run, to make it 27-0.

Lister and senior Lucas Horton hooked up on a 71-yard TD pass with 4 minutes remaining in the half to extend the lead to 34-0.

Keathley tacked on an 18-yard TD run in the final minute of the first half to make it 41-0.

Keathley added a 61-yard TD run in the third quarter, and freshman Cooper Robinson scored his first varsity TD with a 15-yard run in the fourth quarter. Lister, who made seven of eight PAT kicks in the game, tacked on the final point of the contest for the Wildcats.

Lister completed 9 of 13 passes for 242 yards and two TDs, and Horton completed his only throw for 36 yards.

Robinson added 42 rushing yards and on TD on eight carries for the Wildcats.

NP-M had 133 yards in total offense, including 39 rushing yards on 19 carries.

Defensively, Nichols had two interceptions, and Martin had one for the Wildcats.

Athens, now 5-2, is on the road at unbeaten Canton Friday.