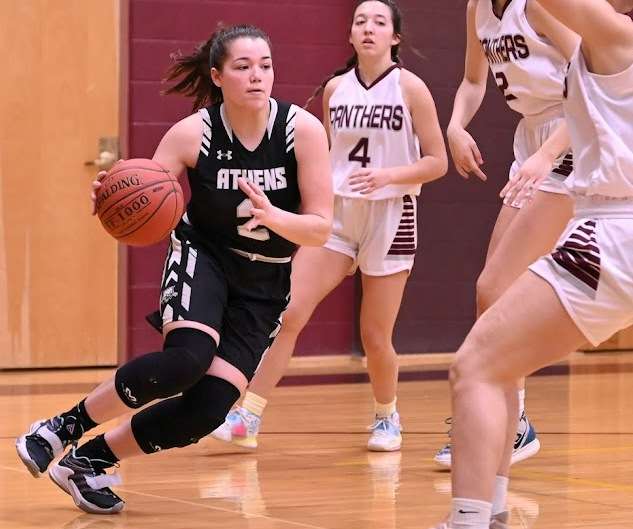 ROME — A dominant defensive effort, and a 28-point showing by Caydence Macik helped lead the Athens Wildcats past Northeast Bradford 37-25 in the semifinals of the NTL Showdown on Thursday night.

The Wildcats advance to the finals where they will take on Towanda in the final on Saturday.

“Girls are excited, we played a great defensive game as a team,” Athens coach Brian Miller said. “And, Caydence scoring 28 points was a stellar offensive game. She was 11-16 from the floor, exceptional shooting and scoring.

“Beating NEB at home is a tough thing to do and we are happy and excited to get back in the NTL overall championship game.”

The Athens defense held the Panthers scoreless in the first quarter.

“I was really happy with our defense,” Athens coach Miller said. “We played hard, communication was outstanding and we executed our defense very well like we practice it on a daily basis. So, to hold a team like that to 25 points makes me proud as a coach.”

Macik got four of the six opening quarter points for the Wildcats as they led 6-0 after one.

Athens led 16-10 at the half after both teams scored 10 in the second quarter.

In the second half it was Macik taking over as she had seven points in the third quarter and 12 in the fourth to help the Wildcats secure the win.

Both teams stayed even in the third quarter at nine points each, but in the fourth quarter Macik scored all of her team’s points to help seal the win. Beebe had two threes in the fourth for the Panthers to try and keep them in the game.

Bartlow finished with five points for Athens and Emma Bronson had four points.

Macik had a double-double, finishing with 10 rebounds, and adding three steals. She was 11-for-16 from the floor in the win.

Addy Wheeler had a strong game leading the Wildcats offense, racking up five assists and seven steals in the game.

Bartlow had two rebounds, two steals and she blocked two shots and Bronson and Olivia Bartlow each had four rebounds in the game.

The Panthers were without leading-scorer Maisie Neuber, who was out with an ankle sprain.

The final is at 7 p.m. at Sayre on Saturday. Towanda made the final with a 46-11 win over Canton.