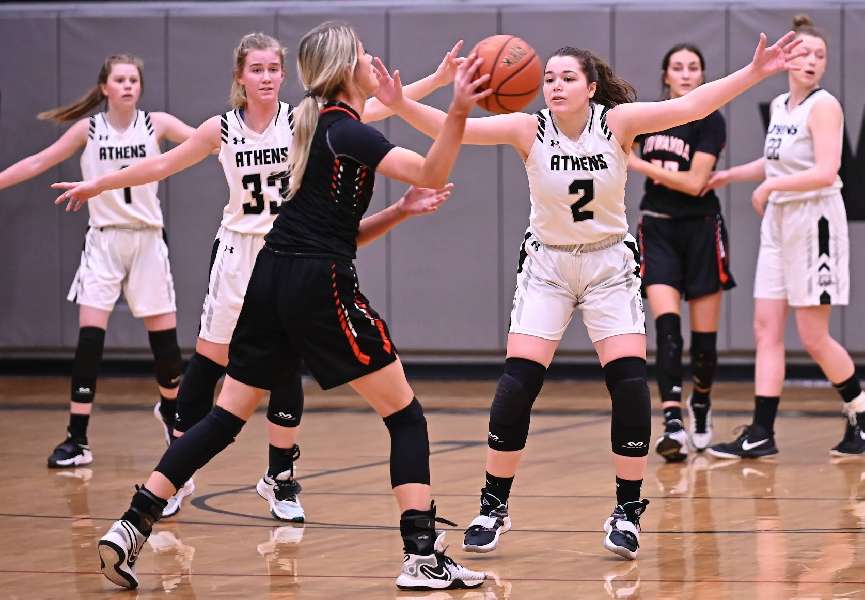 ATHENS — Missed opportunities haunted Athens on Monday as their defense kept them in the game against the league unbeaten Towanda, but they didn’t hit the shots they needed to to get the win, falling, 43-32. to the Knights in NTL Large School girls basketball action.

“First of all, I thought we played much better defense this time than last time,” Athens coach Brian Miller said, referencing his team’s 52-25 loss at Towanda four days ago.

“To be honest with you, it was a blow out last time, they smoked us down at their place,” noted Miller. “Today, we came in and we wanted to prove ourselves that we were better than that team that played down there, and I think we did.

“The foul shots, and not just open lay-ups, open shots, you play against a team like Towanda you’ve got to make big shots when you’re open, and we just didn’t. We wanted to keep that game in the 40s, and, win that game, but we just couldn’t get to the 40s offensively,” said Miller.

In the fourth quarter, it was a 10-point game for nearly two minutes when the Wildcats came up empty in three straight possessions. They created some turnovers to cut it to 36-29 with just over two minutes to play, but two more empty trips on the offensive end followed.

Towanda’s Eliza Fowler then hit an open 3-ball with 1:12 left on the clock, and that pretty much sealed it.

“We got it to six, and then one of their role players made that big three at the top of the key,” said Miller. “We need girls like that to step up and make big shots in certain situations, and we just didn’t tonight.

“But, kudos to Towanda, they’re the best team in the NTL, they’re a very good team in District IV, so, we proved we could play with them for a lot of minutes,” noted Miller. “We just needed to make some shots, make some foul shots, and limits their easy baskets.”

Karlee Bartlow had 12 points to lead Athens, including two 3-balls, while Caydence Macik added nine. Addy Wheeler finished with five, Olivia Bartlow had four, and Natalee Watson rounded out their scorers with two.

The Wildcats finished 8-for-14 from the charity stripe, while also seeing a few uncontested lay-ups rim out.

Macik got the Wildcats on the scoreboard with a free throw, sparking a 5-0 run as that was followed by buckets from Olivia Bartlow and Wheeler, cutting git to 8-5.

In the final minute, though, Bennett had the final say, netting a lay-up, and going 1-of-2 from the free throw line to put Towanda up 11-5 at the first horn.

She finished with six in the quarter, then opened the second with a lay-up to make it 13-5. Athens would counter with two free throws, but a Schoonover jumper off an Aziza Ismailova assist began a 5-0 run for the Knights. Manchester followed with a lay-up, while Bennett went 1-of-2 from the line to make it 18-7.

Athens, though, didn’t let them get too far ahead, going on a 6-0 spurt, as Karlee Bartlow began it with a free throw, and ended it with a 3-ball, closing the gap to 18-13.

Schoonover had the final bucket for Towanda, bagging a jumper to make it 20-13 at the half.

The Knights opened the third quarter with a 4-0 run as Schoonover had a putback, followed by a Manchester steal and lay-up, making it 24-13.

Macik ended the run with a bucket. Then came some free throws — Hurley went 1 of 2, Macik went 2-for-2 - followed by a Manchester 3-ball to put the Knights up 28-17 midway through the third quarter.

Towanda went to some high-low action as Schoonover found Bennett for a lay-up, followed by Hurley getting another free throw, and it looked like the Knights would run away again, gong up 31-17.

Karlee Bartlow, though, got a steal and lay-up for the final score of the quarter to cut it to 31-19 heading into the final eight minutes.

A Macik jumper to start the fourth made it a 10-point game again. Manchester came back with a 3-ball, but a Watson lay-up off a Macik assist kept Athens within in shouting distance, at 34-23.

Manchester would get a put back, ballooning the lead to 13 points, but that’s as big as it would get.

After scoring three points off two steals they cut it to 36-19 with just over two minutes left to play, but that’s when Fowler hit the dagger.

Athens didn’t go away, though, at one point cutting it to nine points on an Olivia Bartlow lay-up with 50 seconds to play.

However, it was Towanda getting the final bucket — a Manchester lay-up off a Hurley pass — to end the game.

Going forward Athens will try and lock up the second spot in the division to make the NTL Showdown. They’re a game behind Troy, but get them at their place next week.

“We have six games left, so we’re going to try to win those six games,” said Miller. “Hopefully, try to make the showdown, and probably go to Northeast and play, which will get us ready for districts,

“Who knows, we could win at Northeast, and get another good game, then try to get ready for districts, and focus on that,” added Miller.

Regardless, he was glad to see the fight in his team on its home floor.

“I told them, ‘be proud of the way you played tonight,’” he said. “If we could have taken care of some little things, it could have been a different game down the stretch.”