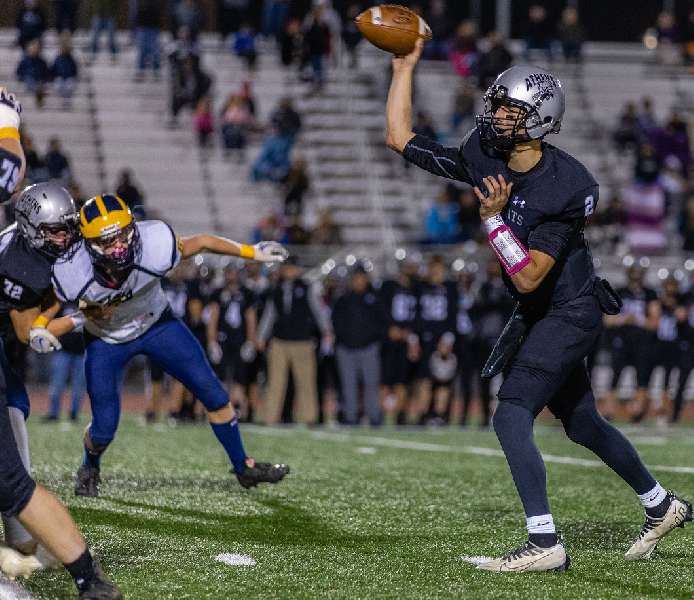 ATHENS — Athens senior Mason Lister has used a mixture of talent and toughness to start at quarterback in 35 straight games, and now stands as the program’s all-time passing yardage leader with 4,618 yards.

“I’m super-proud of him, there are times in his four-year career where he’s taken a beating,” said Athens coach Jack Young. “Other than a few timeouts and a couple missed plays, in four years that kid has showed a ton of toughness and hasn’t missed a game.”

During the Covid season, Lister completed 59 percent (62 of 105) of his attempts for 938 yards, four TDs, and three interceptions.

“Mason’s progression has been rock solid,” said Young. “In an ideal world, he’s going to have a top-notch offensive line in front of him, but we don’t live in an ideal world.

“Mason has gotten better … he’s made some mistakes over his four years, but what I’m proud of he’s gotten better at taking care of the ball — and that’s the bottom line; that’s probably the thing I’m most proud of Mason for.

“We preach on three things, and two of those are turnovers and big plays,” noted Young. “He’s gotten better at taking care of the football and has made a lot of big plays.”

Another strength, says Young, is getting the ball to guy who’s open, and not forcing throws.

“We have six guys we’re throwing the ball to, and they are six pretty talented guys.

“Mason is starting to realize it doesn’t matter who he goes to, he has guys who are going to make plays,” said Young. “He’s getting better all the time in seeing that he doesn’t have to force the ball to someone because he has other guys who can make plays.”

“I’m not a big stats guy … coming from the school I come from, when you throw the ball only three things can happen, and two are negative,” laughed Young.

“My philosophy is if we can complete 70 percent of our passes, then it’s worth throwing the ball,” he noted. “Mason is around the 60-percent mark for his career.

“The common thread during his career for opposing teams is ‘bring pressure,’” added Young. “We haven’t handled that pressure well all the time … but he’s still around the 60-percent completion mark.”

Lister’s progression, says Young, has come from the work he’s put into his game.

“Mason is a kid who has worked hard to improve his arm strength, mechanics and everything else that comes with being a quarterback.

“He’s worked hard on his mechanics … he hit the road hard last spring, and went to a lot of combines and camps. There are a lot of colleges and universities looking at him,” noted Young. “If he just focuses on the fundamentals, he’s going to find a place collegiately to play because he’s intelligent, he can spin it, and he’s coachable.

“Sometimes he can be a handful, but that’s OK, competitors can be that way,” added Young “That’s what I like the most about Mason Lister — he’s a competitor.”