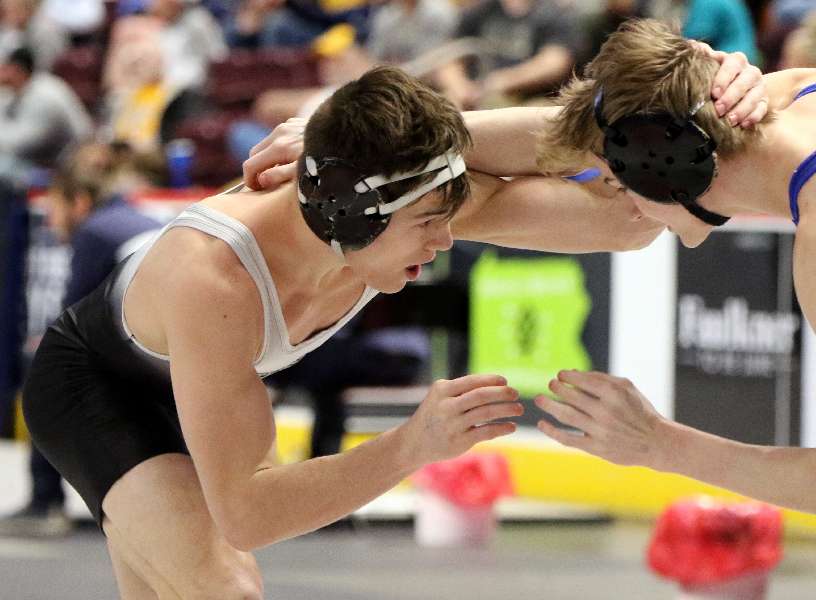 HERSHEY — Athens senior Karter Rude saw his high school career come to an end Friday morning with a setback in the second round of wrestlebacks here at the PIAA Class AA Championships at the Giant Center.

Rude, who finishes his season with a 33-9 record, dropped a 7-5 decision to Northwest Region champion Kane Kettering of Reynolds, who was upset in the round-of-16.

Rude struggled to finish his takedown attempts on the lanky 6-3 Kettering throughout the match.

“It was tough, that kid was super-long … Karter needed to finish a little bit quicker,” said Athens coach Shawn Bradley.

“That one hurts,” noted Bradley. “(Karter) gave one away yesterday, I would have like to have seen what he could have done if he won that one yesterday, but (wrestling) is a very unforgiving sport.

“Karter kept wrestling and had a chance to win, and that’s a testament to his development over the last few years,” added Bradley. “He actually came a long way in one year. I think he wrestled with more of a purpose this year.”

About 30 seconds later, Rude got in on a leg, but Kettering was able to stuff the attempt and score a takedown for a 3-0 lead.

After a Rude escape, he once again got in on Kettering, only to have the Reynolds senior counter for the takedown and a 5-1 lead.

Rude scored a quick takedown in the third period, but Kettering registered a reversal moments later to take a 7-3 lead.

“This loss stinks, but (Karter) is going to do great things in life,” said Bradley. “He is a class act. I wish I had 20 more of him.

“He’s a leader on our team without a doubt, and he led by example,” added Bradley. “He’s a great kid.”

Rude finishes his four-year varsity career with a 96-42 record.