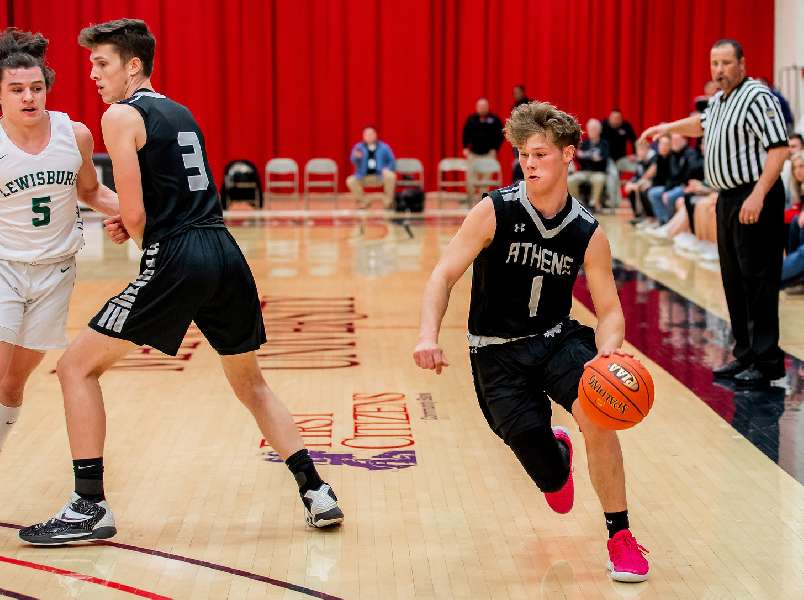 MANSFIELD — All season long, Athens feasted on lay-ups as a key cog of its offense, and that continued against Lewisburg. The difference against the Green Dragons was that those lay-ups didn’t go down, with the Wildcats falling 71-58 in District 4, Class AAAA boys’ basketball championship game Saturday.

“Tonight wasn’t our night,” Athens coach Jim Lister said. “So many bunnies and hippies that we normally make, we didn’t make tonight. We make those shots, we probably win the game. It just wasn’t our day.”

The Wildcats missed six lay-ups in the first quarter, but found themselves down just 13-8. They would tie it up at 22-all in the second quarter, but a 6-0 run would put the Green Dragons up, and they would carry that momentum to a 33-26 lead at the half.

The Green Dragons pushed their advantage to 48-34 in the third quarter, but Athens would chip away, cutting it a 4-point game with just under three minutes to play. It never got closer than that, though, and Lewisburg used lay-ups and free throws to pull away.

“They didn’t quit, they fought right to the end,” said Lister. “They cut it to three points with three minutes to go in the game. It just shows you the heart these kids have. I’m super proud of them, I really am.”

Tucker Brown led the way with 23 points, including a 14-for-16 effort from the free throw line. He also had four boards, and two assists.

At one point, he scored 13 straight points for Athens in the late third and early fourth to get them back in the game.

“He just doesn’t ever stop,” said Lister. “We love the kid to death. I’m going to mis him, he’s just a phenomenal kid, and a tremendous point guard, and he’s going to be a tough one to replace next year.”

Lewisburg’s Jake Hernandez was strong inside with 26 points, while Joey Martin added 15 and Cam Michaels finished with 13. Michaels, the point guard, was a spark plug for the team all game long.

Jack Blough was also in double-figures with 11, while Forrest Zelechoski finished with four, and Henry Harrison added two.

A Lister lay-up gave Athens a 2-0 lead less than a minute into the game.

After some back-and-forth, Hernandez used an old-fashion 3-point play to put the Dragons up 3-2. Babcock would knot things up with a free throw with 4:56 left in the quarter.

Mitchell would get a free throw, followed by a Keathley bucket to cut it to 11-6. Hernandez would follow that with a lay-up, but Babcock had the final say with two freebies to make it 13-8 at the first horn.

It was back-and-forth early in the second as Babcock would cut it to 14-10, but a pair of Michaels free throws pushed the lead back to six.

Brown would get a pair of free throws for Athens, but Hernandez followed with a lay-up. Lister would cut it to 18-15 with just under six minutes left in the second quarter with an old-fashion three-point play, but two more freebies for Lewisburg put them back up five.

Athens would strike back with a 4-0 spurt, as Lister found Babcock for a bucket, followed by Watson getting a putback to cut it to 20-19.

Michaels would end the spurt with a lay-up, but a Brown 3-ball off a Babcock cross-court pass tied it up at 22-all with 3:20 left in the half.

Lewisburg, though, would follow with another 6-0 run — all on free throws. Hernandez was fouled, followed by a technical foul called on Athens, giving him two more freebies. He made all four, they got the ball back, and he got fouled again, making those two to put Lewisburg up 28-22 with 2:42 left in the half.

Babcock would get a lay-up, but Michaels nailed a step back 3-ball to push Lewisburg’s advantage to 31-24.

The two teams would trade points down the stretch to make it 33-26 Green Dragons at the half.

Athens went on a 4-2 spurt to start the third quarter, with buckets from Brown and Babcock, cutting it to 35-30. Lewisburg would respond with a 7-0 run to put them up 42-30 near the midway point of the quarter.

Brown would end the spurt with a lay-up, the beginning of 13 straight points for the Wildcats.

Martin would hit a 3-ball, but Brown came back with two freebies. Martin would get another 3-pointer to push their lead to 14 points, but Brown responded with a lay-up.

The Wildcats then went to the line three times after that, but went 0-for-5.

However, Brown went to the line twice in the final 12 seconds, going 3-for-4 to make it 49-39 going into the final frame.

Lewisburg’s Blough would get back-to-back lay-ups early in the fourth to extend the lead to 53-39, but four straight free throws from Brown cut it to 10 points again.

Blough continued the hot hand, getting a putback, but two lay-ups from the Wildcats saw them cut it to 55-47.

Hernandez would end that stretch with a pair of free throws, followed by Michaels getting a steal and lay-up to make it 64-52 with 1:40 left.

At the other end in one possession, Athens had four good lay-up looks, but none of them went down. Michaels would get the ball, and drive straight to the bucket, but Pritchard played the best defense of the game, going straight at him to force an errant shot.

The Wildcats went down, with Lister finding Keathley for a basket to make it 64-58 with 1:10 left.

That’s the last time Athens would score, though, as Lewisburg finished the game on a 7-0 run to secure the win.

Despite coming up short, Lister was glad to see his team get Athens back into a district final.

“I’m just ecstatic for all of them,” he said. “They put the work in, the time in, and came up a little short tonight.”

Athens will now travel to the District 2 runners-up on Tuesday.

“We’ve got to give them the weekend off, and just kind of swallow this one hard,” said Lister. “We’ll go back at it hard on Monday.”