TOWANDA CRUISES TO 52-25 WIN OVER ATHENS 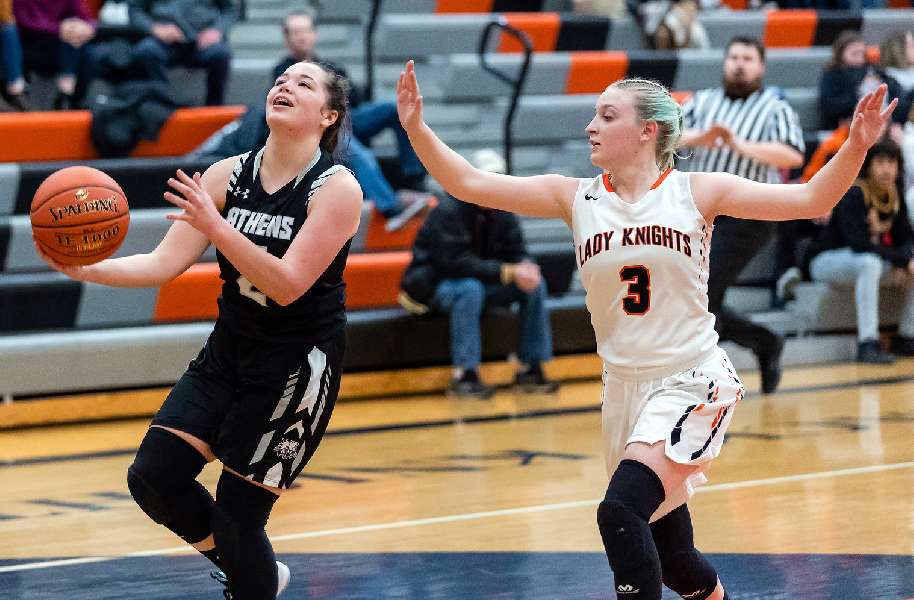 TOWANDA — Athens dug itself a big hole early, and Paige Manchester and Porscia Bennett made sure the Lady Wildcats wouldn’t get out of it, leading Towanda to a lopsided 52-25 win here Thursday night in a key NTL Large School girls basketball match-up.

“(Towanda) came ready to play, and we didn’t,” said Athens coach Brian Miller. “Porscia (Bennett) and Paige (Manchester) had 18 of their 26 points in the first half … they stepped up in the big game and did a great job — kudos to them.

“We got in a hole, and against two good players like that, it’s tough to get out of that hole,” he added.

Miller made no excuses after the loss.

“(Towanda) outplayed us,” he said. “Their game plan was to pressure the ball to get some turnovers, and it worked.

“Their plan was to focus on Caydence (Macik), and make other girls hit some shots, and, unfortunately, we didn’t hit those open shots,” Miller noted.

“When Caydence Macik only gets six shots, that is not a good thing for us,” he continued. “They were focused on her, and Bennett did a good job on her …  she used her quickness and athleticism to make things difficult.

“We had our opportunities. We made 1 of 10 free throws in the first half … and we missed some open shots, but their role players made some key 3s.

“Kudos to Coach (Rob) Gentile and his girls.,” added Miller. “They played good, and we did not.”

Bennett scored seven points in the first quarter, while Manchester added four, and Destiny Brennan canned a 3-pointer to help Towanda to a 16-4 lead after the first eight minutes.

Manchester scored four points in the second quarter, and Aziza Ismailova drained a 3-pointer in a 10-5 spurt that gave the Knights a 26-9 lead at the break.

Bennett scored from close range, and Manchester drained a 3-pointer and made 1 of 2 free throws to give Towanda a 32-9 lead with 5 1/2 minutes remaining in the third quarter.

Senior Olivia Bartlow had five boards and one blocked shot for the Wildcats, and junior Natalee Watson grabbed three rebounds.