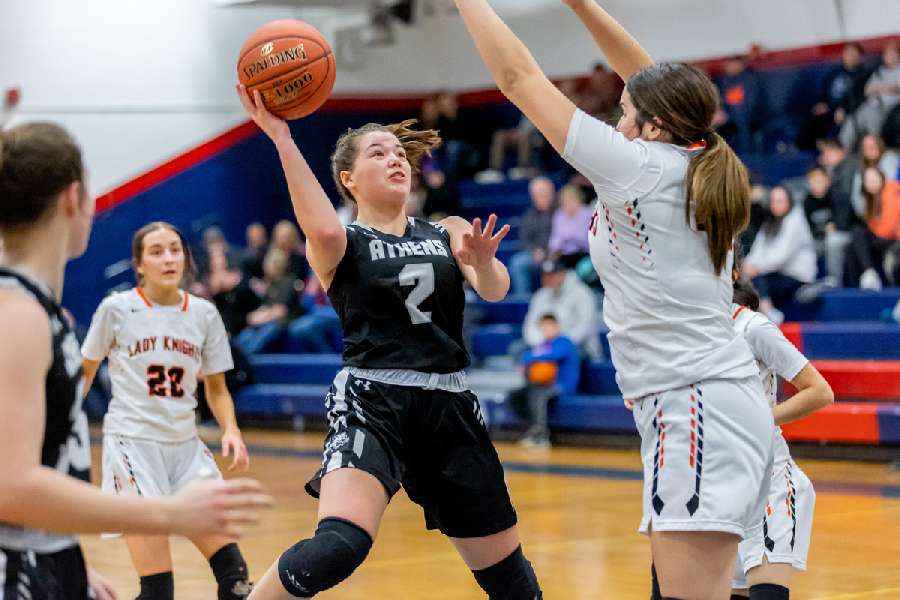 SAYRE — For two-and-a-half quarters, Athens was able to hang with Towanda, but a Black Knight run late in the third quarter, and early in the fourth, helped them edge the Wildcats, 43-37, for the NTL Showdown title Saturday.

“That was a nice thing we took that lead, but, again, Paige (Manchester) had some big threes in the second half, and then we had some mistakes in our half-court, where we turned it over, and they got transition baskets,” said Athens coach Brian Miller. “That’s the two things we were concentrating on — don’t let Paige beat us from the perimeter, and don’t let them get transition baskets, and that hurt us a little bit.”

“We’ve gotten better,” Miller said. “They beat us by 30 at their place, they beat us by 11 at our place, and then we lost by six, and we were ahead in the third quarter, so I’m using it as motivation that we’re getting better.”

Athens came out and took a 4-0 lead on buckets from Olivia Bartlow and Wheeler. Hurley would answer with a 3-ball, then Manchester made a lay-up to give them their first lead.

Schoonover would make it 7-4 with a jumper, but a Karlee Bartlow lay-up cut it to 7-6. Manchester then found Bennett for a bucket to take a 9-6 lead at the first horn.

The lead would get as high as 14-7 early in the second on a Bennett 3-point play.

Athens, though, would get a lay-up from Olivia Bartlow, followed by a 3-ball from Wheeler, to cut it to 14-12.

Bennett opened up the quarter with a lay-up, but Karlee Bartlow answered with a 3-ball to make it 18-18.

The two teams would trade baskets, with Athens getting a lead when Karlee Bartlow hit a jumper with 4:12 on the clock.

But that’s when Towanda made their move, beginning with a Manchester 3-ball. She then found Bennett on the run out, followed by another 3-ball from her to put the Knights up 28-22.

After a Macik free throw Brennan then hit a 3-pointer with under a minute left in the quarter to put them up by eight points. A Macik lay-up cut it to 31-25 with one quarter left.

Athens would cut it to a 4-point game on a Karlee Bartlow 3-ball, but Manchester followed with a 3-pointer of her own. Karlee Bartlow would get a lay-up, followed by Bennett going 1-of-2 from the line.

After two Athens misses at the charity stripe, Hurley hit her second 3-ball of the game to Towanda a 39-30 lead with just over four minutes to play.

Olivia Bartlow would get a putback, but Manchester got to the line at the other end to keep it at nine points.

Athens wouldn’t score again until there were 18.8 seconds left to play, and by that time Towanda had added two freebies to go up 43-35.

The Wildcats will be hosting a district game next week, possibly Lewisburg, and they hope they can continue their strong play into the postseason.

“We’re going to use this to get ready for probably Lewisburg on Thursday night,” said Miller.