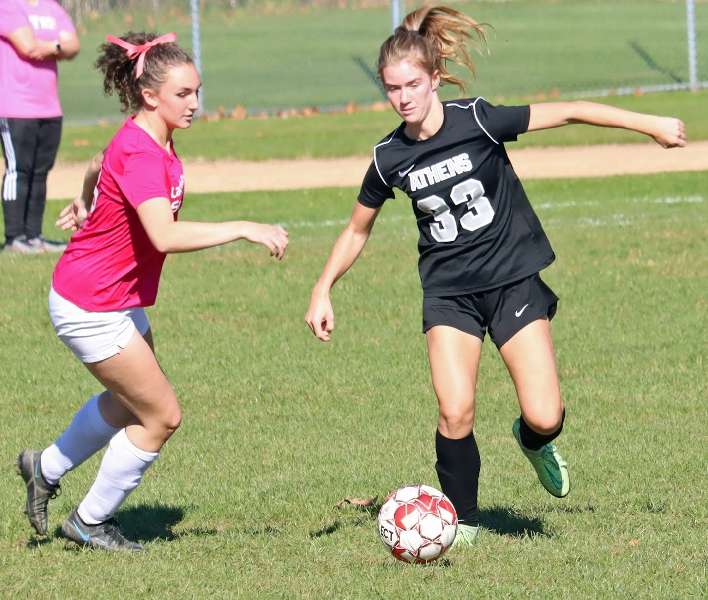 EAST TROY — For 80 minutes, Athens’ defense stood on it heads to keep Troy out the goal. They allowed a goal in the first minute, but then shut Troy down for the next 79. However, inside the first minute of overtime, Troy scored for the 2-1 win here Saturday during NTL girls’ soccer action.

The win clinches the NTL title for Troy. If Athens had won, the two teams would have been tied.

Troy’s first goal came 39 seconds into the match off the foot of Addy Parker. However, Athens held strong after that, sticking to Troy’s forwards — Parker and Saydi Renzo, while Mya Thompson cleaned up the Trojan through balls.

“I am very proud of how the girls responded,” Athens coach Rich Pitts said. “To get scored on that early can cause it to go sideways on you, but they didn’t panic.”

Athens’ goal came when Ally Thoman found Emma Yohe, who beat two Troy defenders, and the goalie, to knot things up just past the halfway mark of the first half.

“We worked our way back into the game, and got a great goal rom Emma Yohe, who has just returned from injury,” Pitts said. “She was so excited, and that was huge for us.”

After a scoreless second half, Troy’s Camille McRoberts found seam into the box, and buried her shot into the high near corner for the game-winner.

“In OT, we just didn’t make a good play on the ball, and it just fell to Camille’s foot, and game over,” Pitts said.

Troy’s had some fast starts this season, but this may have been the fastest, as Saydie Renzo found Parker, who beat the goalie with a far corner shot to put the Trojans up 1-0.

The Trojans had two more good chances within the first 10 minutes as Bartlow stopped a strong Alexis McRoberts shot, and Parker would hit the crossbar.

Athens’ first good chance came in the 21st minute, as Troy’s defense turned it over in the middle of the penalty box. Athens got a hard shot off, but Troy keeper Madelyn Seeley challenged the shot, and blocked it out of the box.

Troy had another chance a minute later, as a Parker cross went through Bartlow’s hands across the face of the goal, but the Trojans weren’t able to get a touch on it.

Then, with 17:19 to play, Athens found the equalizer. Thoman hit a streaking Yohe, who got her shot off with two Troy defenders on her. She beat the goalie low, and it just snuck inside the far post to make it 1-1.

Early in the second half, Alexis McRoberts had a good look on a direct kick just outside the box, but her shot was just over the crossbar. At the other end, with 31:07 on the clock, Thoman had a hard shot that was saved by Seeley.

Troy’s best opportunity to take the lead came at the 28:55 mark as Parker had a nice lead pass to Renzo into the box behind the defense. Renzo, though, lost her footing, and couldn’t get a good shot off.

Alexis McRoberts would follow that up with another direct kick, this one also stopped by Bartlow. With 13:30 on the clock, Parker crossed it high just inside the post, but Bartlow was able to make a clean grab.

Inside 10 minutes, both teams each had a chance for the winner. Seeley would make a good stop on an Athens shot, while a Renzo attempt was just wide of the net.

“The second half they had a bit more of the looks, but we kept battling to get the next goal,” Pitts said. “That didn’t come.”

Then came Camille McRoberts’ goal in overtime for the winner.

Bartlow finished with 10 saves on the night, as Troy had a 16-8 edge in shots.

“I’m disappointed four our seniors, but they have had great careers so far, including a district title, and two NTL titles in their four years,” Pitts said. “We will see if they have any magic left for probably next Saturday in the district semifinals.”