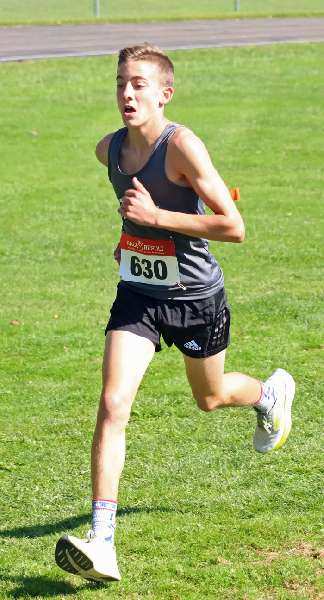 ROME — After the varsity races here Saturday at the NTL Coaches Championships, the future of the league was on display as the junior high runners took the stage.

Two teams stood out on the day — the Athens boy and the Wellsboro girls as both groups came away with team and individual titles.

Athens’ Graham Wanck (9:53) added another title to a season full of them, pulling away early for a comfortable win on the 1.68-mile course.

“I’ve been working hard all year, and it’s really paid off this meet,” said Wanck. “It’s not an easy sport, but I love it.”

Wanck’s had quite a season — earning a race record in his win at the McQuaid Invitational, winning the Bob Green Invite, and going undefeated in the NTL.

“I was really surprised, and really happy with myself,” he said about his win at McQuaid. “Coming into the next races, I was, you know, raising the bar a little bit, since I know I can do that.”

He’s excited to see what him and his teammates can do once they get up to the varsity level in the next couple of seasons.

“I think our team could go really far,” said Wanck. “This meet, we didn’t have our fifth and sixth runners.”

“It’s awesome,” Kosek said about winning the girls’ title. “I’ve been trying for two years. This is my last big meet of junior high, so it’s super exciting.”

Kosek’s goal was to get the course record.

She’s also glad to see her team take first, and hopes this is a sign of things to come for the Hornets down the road.

“We should have some good middle schoolers moving up to varsity, and moving into junior high,” said Kosek. “We’re very happy to be growing.”