With 5:37 remaining in the first quarter, Macik pulled down the milestone carom.

“Congrats to Caydence on a great achievement,” said Athens coach Brian Miller. “Rebounding is about effort and attitude, and Caydence plays that game at a high level.

The Wildcats limited the Tigers to just one field goal in the first quarter, and one in the entire second half.

“We played great team defense tonight, and had some great fast-break passing in transition,” said Miller.

Five different Lady Wildcats found the scoring column in the second quarter, but they were only able to add one point to their advantage, taking a 24-12 lead into the halftime locker room.

Macik pumped in 12 points in the third quarter, and Karlee Bartlow added four in an 18-2 run that gave Athens a 42-14 lead entering the final eight minutes.

“I thought we played a great team game, especially on the defensive end,” said Athens coach Brian Miller. “We played very physical defense on our end

“Mansfield played a physical game, too,” noted Miller. “The only thing we didn't do great tonight was make some open looks, but that's part of the game. Sometimes they fall, sometimes they don't.

“But the rest of our game was top-notch,” added Miller. “It was nice to see us play this way two games in row.”

Senior Caydence Macik scored five points in the first quarter, including an old-fashioned three-point play late in the stanza to help the Lady Wildcats to an 11-2 lead.

Junior Emma Bronson had five points, including a conventional three-point play, in the second quarter, and freshman Addy Wheeler canned a 3-pointer to fuel a 14-4 run that extended the Athens lead to 25-6 at the half.

Macik scored nine more points in the third quarter, including her third three-point play of the game, and Bronson added four points in a 16-11 advantage in the stanza to help the Lady Wildcats to a 41-17 lead entering the final eight minutes.

Junior Karlee Bartlow had six points — on a 3-pointer and a three-point play — in the fourth quarter, and Macik canned a 3-pointer and scored five points in a 15-4 run in the final eight minutes.

Athens, now 8-3, travels to Benton Saturday. The JV game tips off at noon. 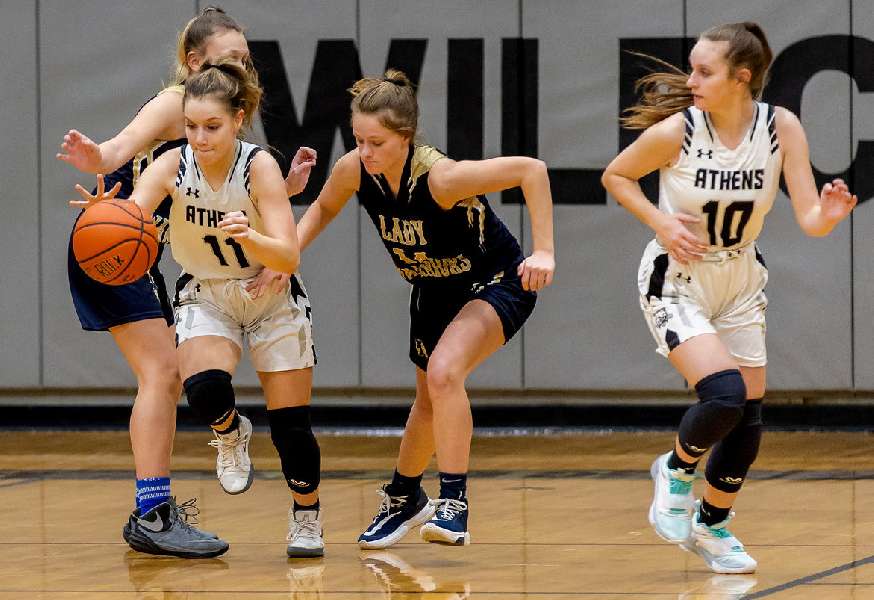 Mya Thompson scored six points in the first quarter to fuel an 11-2 run in the opening stanza.

The junior Wildcats used a 7-2 spurt in the third quarter to stretch their lead to 18-4 at the half.

Ella Coyle and Thompson scored four points apiece in the third quarter to help Athens to a 26-9 lead heading into the fourth quarter. 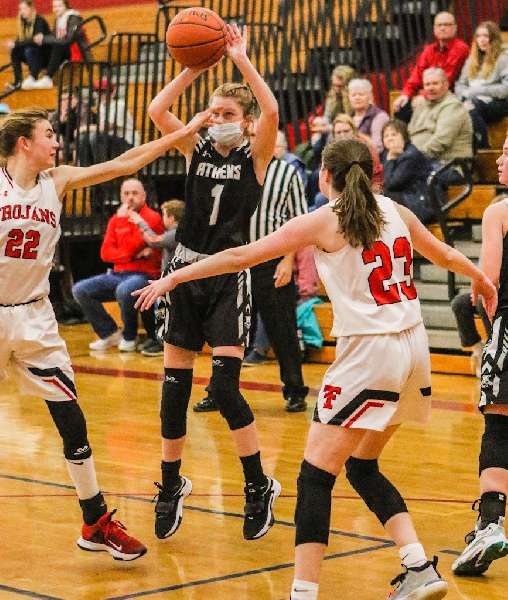 TROY — Troy held Athens without a field goal in the fourth quarter, and used a 9-2 run to pull out a 35-28 win Thursday night in NTL Large School girls basketball action here at the Commons Building.

The Lady Wildcats, now 7-3, were playing without one of their leading scorers Karlee Bartlow.

“We missed Karlee Bartlow on offense,” said Athens coach Brian Miller. “We played well at times, but shot the ball poorly from the floor.

“At times, we executed very well, but we didn't finish around the basket.

“And, we had way too many turnovers in a game like that,” added Miller.

Senior Caydence Macik had seven points, including an old-fashioned three-point play, in the first quarter, and freshman Addy Wheeler canned a 3-pointer to help Athens to a 12-5 lead after the first eight minutes.

Rachel Kinsley scored eight points in the second quarter, and Sydney Taylor added four as Troy used a 15-5 run to rally for a 20-17 lead at the halftime intermission.

Wheeler knocked down another 3-pointe and scored five points in the third quarter in a 9-6 spurt that tied the game at 26-26 entering the final eight minutes.

ATHENS SHUTS DOWN WYALUSING IN 42-20 WIN

Senior Caydence Macik led the Lady Wildcats with a double-double, scoring 16 points and pulling down 10 rebounds.

Macik scored seven points in the opening stanza, including a 3-pointer late in the first eight minutes, to help Athens to an 11-2 lead.

Karlee Barlow scored seven points in the second quarter to fuel a 13-3 burt that gave the Lady Wildcats a 24-5 lead at the break.

Athens added a point to its lead in the third quarter, taking a 32-12 advantage into the final eight minutes,  then made 4 of 7 free throws down the stretch to seal the victory.

The junior Wildcats were held without a field goal in the first quarter, but Mya Thompson was 4-for-4 from the free-throw line. Athens trailed 5-4 after the opening stanza.

Sara Bronson took over for Athens in the second quarter, pumping in 11 points to fuel a 16-2 blitz that gave the Wildcats a 20-7 lead at the break.

Athens out scored Wyalusing, 10-9, in the second half, with Thomason scoring six points, and Bronson adding four.

Raven Glisson had four rebounds and one blocked shot in the win, while Izzy Davis had four boards, and Savannah Persun grabbed three boards. 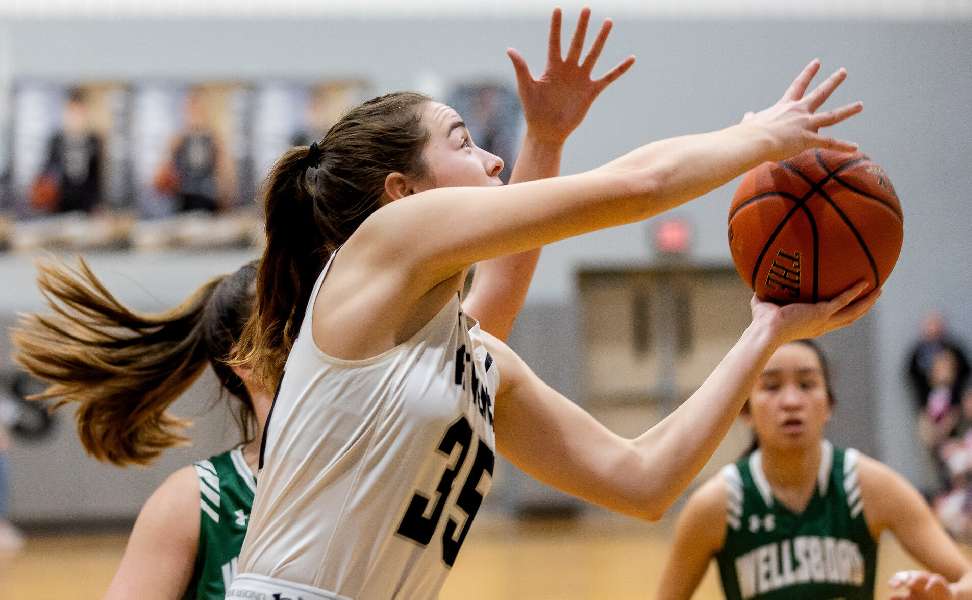 Bartlow knocked down a 3-pointer, and scored five points in the first quarter, and senior Caydence Macik, returning after a two-game absence, added four points to help the Lady Wildcats to a 10-8 lead after the first eight minutes.

Bartlow canned a pair of 3-pointers, and scored eight points in the second quarter, and Macik added four points in a 14-6 run that extended the Athens lead to 24-14 at the half.

Athens added two points to its lead in the third quarter, taking a 32-20 lead into the final eight minutes.

The Lady Wildcats made just 2 of 7 free throws in the fourth quarter, but held on for the win. 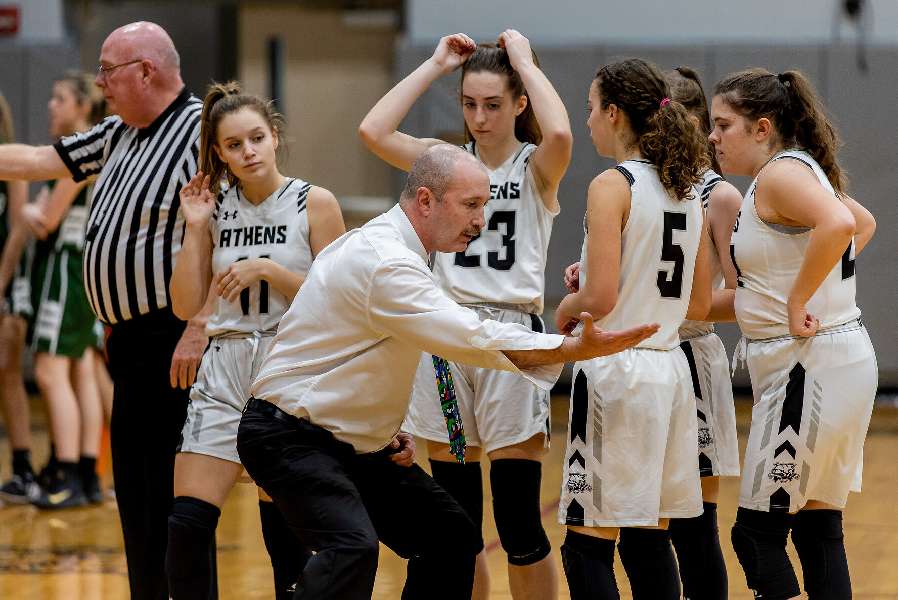 Sara Bronson scored four points in the first quarter, and Mya Thompson added a bucket to help the junior Wildcats to a 7-2 lead after the opening stanza.

Wellsboro, which ran big chunks of time off the clock using a patient half-court offense, outscored Athens, 6-0, in the second quarter, and the third quarter to take a 14-7 lead into the fourth quarter.

The Athens defense held Wellsboro scoreless, but could only muster two buckets — by Bronson and Thompson. The Wildcats were also 0-for-4 from the free-throw line in the final seven minutes, and 1-for-6 in the game.